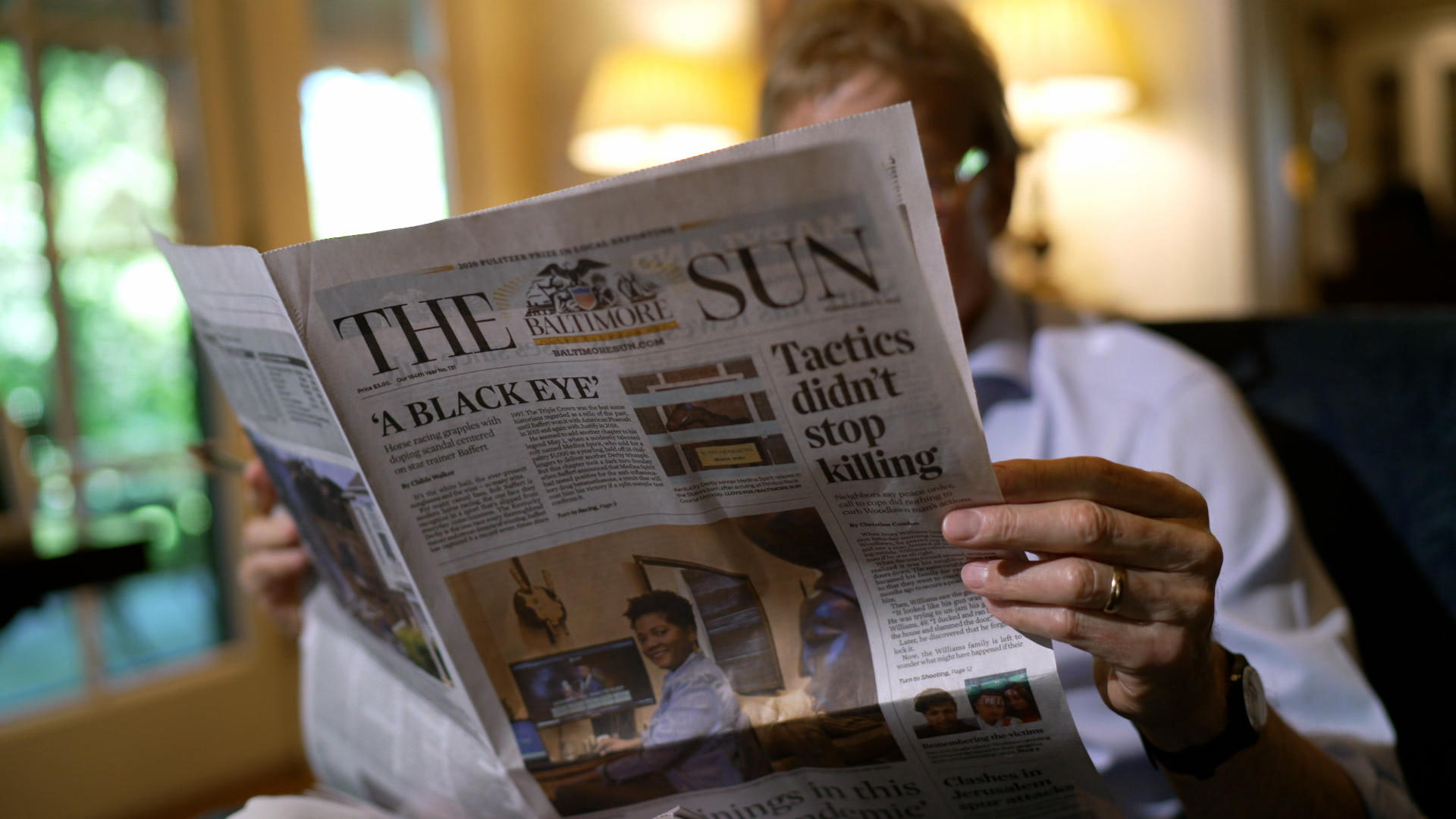 Newspaper industry in state of decline: not exactly a stop-the-presses headline. For two decades now — owing largely to the loss of advertising revenue to Facebook and Google — fewer and fewer Americans get their news, comics and sports from all those gazettes and tribunes and journals. But that doesn't tell the whole story. There's an additional threat: hedge funds and other financial firms that now own nearly a third of the daily papers in America. And these new owners are often committed not to headlines and deadlines, but to bottom lines. One fund in particular has been called by some in the industry a "vulture," bleeding newspapers dry. It all prompts the question: as local newsrooms and local news coverage shrivel up, to what extent does democracy shrink with it?

For the last 24 years, he's chronicled this community of 23,000 for the local newspaper, the Mercury, which at one time had dozens of reporters. Now, Brandt is literally the last reporter standing in Pottstown.

Jon Wertheim: When a community like this loses their local reporters. What else are they losing?

Evan Brandt: It reminds us all about shared experiences. You know who died, you know who graduated from high school. You know whose kid had a great game. You know those are all important elements about holding people together.

Jon Wertheim: You're describing the soul of a community?

Brandt took us to the old headquarters of the Mercury. Punching above its weight, the Mercury won a Pulitzer Prize in 1979 and another in 1990. Now, it looks like this.

Evan Brandt: My desk was right about here. And the editor sat up there. The sports guys were along here. The photographers were in the back. Anyone could walk in the front door and say, "I need to talk to a reporter. My sewer's backing up and the township isn't doing anything about it. Can you do something?"

Brandt's turned his attic into a command center.

It's here that he scrambles to cover Pottstown, 20 surrounding towns and nine different school districts.

Overworked and overwhelmed, Brandt has seen his industry battered by all sort of forces — disappearing classified ads; people getting news for free online.

But he says the worst culprit is the hedge fund Alden Global Capital, which bought the Mercury in 2011 and has since sold the paper's building and slashed newsroom staff by about 70%. Severe even by the standards of the newspaper sector that has seen an astounding 57% job loss since 2008.

In 2017, after another round of layoffs, Brandt says he felt angry and wanted answers and accountability. So he paid a visit to the Hamptons summer home of Heath Freeman, the 41-year-old president of Alden Global Capital, and knocked on the door.

Jon Wertheim: What'd you want to say to him?

Brandt recalls that a woman let him in; behind her, he caught a glimpse of Freeman, who walked away.

Jon Wertheim: You never got to ask him that question.

Evan Brandt: I did not.

This secretive hedge fund — their website shows a single photo — started building its print empire over the last decade and now owns more than 200 newspapers, making it the country's second largest newspaper owner behind Gannett.

Alden's rapid takeover and cuts have alarmed U.S. lawmakers.  In 2019, 21 senators wrote to Heath Freeman asking him to abandon his "newspaper-killing business model."

Freeman, though, has doubled down. Last year Alden made a play for Tribune Publishing, home to historic papers like the Baltimore Sun and the Chicago Tribune.

Gary Marx: This is an attack on our democracy.

Gary Marx and David Jackson spent 30 years as investigative reporters at the Chicago Tribune, a paper that has won 27 Pulitzer Prizes.

Gary Marx: Local and regional newspapers are so important to our communities, to holding our leaders accountable. They're not just going after some business that is trying to make money.

They admit the Tribune had been crippled for years by bad management; but after seeing Alden buy the Denver Post and then gut staff by 70%, the journalists were worried the hedge fund would do irreversible damage.

Jon Wertheim: So what'd you do?

Gary Marx: We fought back. That's what we did. Dave and I just decided that we are gonna throw everything we possibly can, use all our investigative and reportorial skills to save this organization that is so important we felt to the future of the city we love, Chicago.

So this investigative team–accustomed to exposing corruption and injustice, acting as watchdogs on local government-they turned their attention to their potential new owners.

Jon Wertheim: You've said when Alden Capital arrived, it was an existential threat.

Jon Wertheim: Why is this firm particularly nefarious?

David Jackson: Well, Alden has sort of a playbook of going into a distressed newsroom and selling off the real estate and property, equipment, things like that. And second of all, diminishing the resources that the reporters have.

David Jackson: These are executives from a hedge fund who live in a very wealthy lifestyle. They're not taking the profits and using them to build the Tribune.

Jon Wertheim: What's your response to someone who'd say, "Look, this is capitalism"?

David Jackson: Well, we've always been aware that we're doing journalism in a capitalist democracy. And we've always embraced that. But we felt that Alden didn't recognize the civic trust that's embedded in this profit-making machine.

Jackson and Marx say what they learned about Alden only fueled their sense of urgency. So in 2020 — putting their jobs at risk — they wrote an op-ed in the New York Times pleading for a philanthropist, foundation, anyone to step forward to save their paper.

One man tried: Maryland Hotel Magnate Stewart Bainum, a life-long subscriber to the Baltimore Sun. Bainum committed $200 million and we followed him last year scrambling to put together a deal to buy tribune publishing.

Bainum couldn't find a partner. Last May, Alden bought Tribune Publishing for more than $600 million and two days later started offering buyouts to Tribune Employees. More than 40 have since left the Chicago Tribune: including one-fourth of the newsroom.

Freeman declined our repeated requests to sit down with 60 Minutes. But his public relations team sent us letters he wrote to other newspaper owners that state Alden is committed to providing "robust, independently minded local journalism" and that it's time for tech giants to start paying for the "billions of dollars" they're making off of news publishers' content.

The newspaper crisis didn't begin with Alden; and this is not the only financial firm in this sector. But Alden is often held up as the worst actor. One study conducted by the University of North Carolina in 2018 found that some Alden-owned newspapers had cut staff at twice the rate of their competitors.

Steven Waldman is a former journalist. In 2011, he studied the decline of the local news industry for the Federal Communications Commission.

He says that, in the absence of local reporting, there's evidence of increased corruption by local officials. One example he points to: Bell, California. When the local newspaper there shut down, scandal ensued.

Steve Waldman: The elected officials just kept voting themselves pay raises to the point where the city manager was making $800,000, just because there was no one there.

Jon Wertheim: I'm guessing there's nothing specifically corrupt about Bell, California, that wouldn't replicate in any of 1,000 other towns.

Steve Waldman: Pretty much through all of human history and throughout the world, when you have power that isn't watched, it tends to get abused.

Waldman says it's not just that local news has been hollowed out; it's what has replaced it.

Waldman believes in flooding communities with local reporters. In 2017, he co-founded "Report for America," a program that sends print, radio and television journalists to newsrooms in underserved communities across the country.

We brought together five reporters.

Jon Wertheim: These studies that show that people trust local media more than national media. Doesn't sound like that surprise you, those results.

Chris Jones: These are our neighbors, you know? We're not writing about someone I'm never gonna talk to again. They're people before they're interview subjects.

This is Jones on January 6th. He had cultivated such a level of trust from his sources that he was one of the few reporters covering the insurrectionists as they stormed the U.S. Capitol.

Chris Jones: I got a lot of calls immediately after the 6th from a lot of different, like, news organizations, people who wouldn't answer an email from me, you know, a week prior.

Jon Wertheim: You were the local journal[ist]. You had the sources.

Jon Wertheim: You had the relationships

Camalot Todd: A lot of national media is coastal and it stays coastal unless there's a big news event. And then they fly their reporters in, write the story, and fly 'em out.

Gracyn Doctor experienced this firsthand. Her mother was one of nine African Americans killed by a white supremacist in the 2015 Mother Emanuel Church shooting in Charleston.

Doctor felt that when the national media parachuted in they were looking for soundbites, instead of examining the deeper questions.

Gracyn Doctor: Especially in a place like Charleston, South Carolina, where, like, the history of racism runs very, very deep. That was the opportunity to really dive into some of that history, you know? Like, why did this happen in this community?

While newspapers like the Washington Post and LA Times have been bought by billionaires, Waldman says addressing this crisis falls to all of us.

Steve Waldman: We need a dramatic increase in the-- the commitment of foundations, and philanthropists, and donors like you and me to actually supporting local news.

Remember Stewart Bainum, who lost out to Alden Global Capital? He's launching "The Baltimore Banner," a nonprofit digital news outlet, to go head-to-head with the Baltimore Sun for subscribers. It will cover only local news with plans, over the next three years, to hire more than 100 reporters.

After sounding the alarm about Alden Global Capital, Gary Marx and David Jackson left the Chicago Tribune. Jackson is still working as a reporter at a nonprofit newsroom in Chicago. Marx is now living what he calls his second dream job as a high school football coach. They are more convinced than ever that local news cannot become yesterday's news.

Gary Marx: Journalism is one of the most noble professions there is. You can have tremendous impact on society.

David Jackson: I work with a lotta young people. And-- I tell them that the- we're leaving them [with] a smashed and broken system, but that they're gonna have to reinvent it because it's necessary. Journalism is necessary for the survival of American democracy.

As for Heath Freeman, this past summer, he bought a Miami mansion for $19 million, a transaction discovered and reported by a local news outlet.

The Leaning Tower of San Francisco

Surfside condo collapse: Still searching for answers in the rubble

Carnegie heroes and the neuroscience behind acts of heroism
Thanks for reading CBS NEWS.
Create your free account or log in
for more features.
View CBS News In
CBS News App Open
Chrome Safari Continue
Be the first to know
Get browser notifications for breaking news, live events, and exclusive reporting.