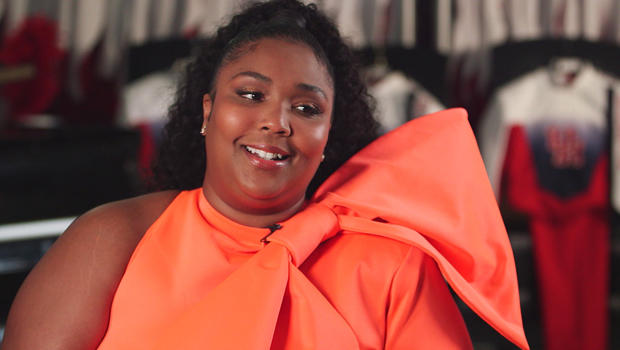 She's been compared to some of the greatest singers of our time, and now you know why. Her name is Melissa Jefferson, but she's known by her childhood nickname, Lizzo, and you might say this has been her year:

She's still riding the wave of an acclaimed new album, "Cuz I Love You"; and this summer she had the #1 song ("Truth Hurts") AND the cover of Elle magazine.

Plus, she stole the show on MTV's biggest night:

At 31, it seems Lizzo has finally arrived, though she's been here all along.

Correspondent Tracy Smith asked, "Do you feel like your career was a slow build or something that happened fairly quickly?"

"It's the slowest build of all time," Lizzo laughed. "It's the slowest burn. I've done so many tours, but nobody knows who I am until this year. But would I have been able to maintain this type of mainstream success ten years ago? Hell to the nah!"

"You needed that ten years?"

"I needed this ten years. I feel like a master."

She's also become a master of the positive attitude. In nearly every show, she leads the audience in her own personal mantra: "I love you ... You are beautiful ... And you can do anything."

Smith asked, "Does it work for you?"

"It works. It works. Because talking bad to yourself works. It's the antidote to, 'So stupid.' It's like, 'No, you deserve this. You're intelligent..' Words are so powerful."

And she knows just how powerful those words can be, after a lifetime spent listening to mean (or even well-meaning) comments about her weight.

"It's like a little mosquito bite. Somebody's like, 'Well, you know, you a big girl, so you can never have short hair. You always have to have a big hair, 'cause you're a big girl.'

"And they say that lovingly, but I'm like, that's a little mosquito bite. You don't even know it's there. But, soon you look up, you're covered in mosquito bites. And you're like, 'Oh my God, I have all of these things.' But they were so normalized to me, because they were so innocent."

"They meant well. But I had to, like, peel back a lot of layers."

But it didn't start out that way: Lizzo was born in Detroit, and grew up in the Houston suburbs. "I would walk to my best friend's house and we'd play Spice Girls, and we made our own little girl groups."

Revisiting Elsik High School, where she learned flute as a teen, she said that Manny Gonzales, her band director at Elsik, helped give her the focus she needed: "I've had a lot of talks with my band director in here, where he was like, 'You're always late. You're always daydreaming. But, you're so talented. Get it together.' And those talks really impacted me."

"He was formative to you, right?" asked Smith.

With Gonzales' help, Lizzo went to the University of Houston on a music scholarship, majoring in classical flute. But two years into her university studies, she dropped out of school. Her father, Michael, who battling congestive heart failure, urged her to stay with the flute.

After composing herself, Lizzo explained: "I think sometimes I get angry instead of sad, because it's, like, a defense mechanism, to be strong."

"And you want to be strong?" asked Smith.

"Yeah. Well, I have to be. Like, I have to be strong. 'Cause, like, life really doesn't give you an opportunity to show vulnerability. Life doesn't really give you a chance to let your guard down."

Eventually, she picked herself up and started climbing the rungs of a music career, through bouts of poverty, homelessness, and crippling self-doubt.

She says her career finally took off once she started to believe that beauty doesn't have a size.

Smith asked, "You've said you've struggled with self-confidence. How did you change it?"

"It's not something that you really change; it's something that you address and work on," she replied. "I had to address every layer of insecurity. Cause I can't just be like, 'Alright, my arm's not jiggly and lumpy anymore.' That's delusional. You have to be like, 'That's not ugly to me anymore. and it's not wrong to me, it's beautiful to me,'

"And I think that is why I'm able to call myself fat. And people are like, 'No! Even my friends. I'll be like, 'Well, bitch, you know I'm fat.' And I'm like, 'Don't say no. I am fat. I am beautiful.' I think it's because I learned to actually look all of my insecurities in the face, call them by their name, and fall in love with them."

"Which is a process – this hasn't ended yet, right?" Smith asked.

"It's a daily exercise?"

Last month, Lizzo went back to the University of Houston, and got a reception worthy of a superstar.

The school's most famous dropout has become a role model. Speaking to music students she said, "You're not supposed to be happy all the time. You're not supposed to know what you're doing all the time. Especially at this age. But not knowing what you're doing has nothing to do with where you're going. So, I want you to know that: cherish your journey and respect your journey. And keep playing your instrument, man, 'cause people jealous of me 'cause I still play the flute!"

You could say this is Lizzo's moment, and it's one she wants to share with the world.

For an extended profile of Lizzo by Tracy Smith click on the video player below:

To watch an extended conversation with Lizzo, click on the video player below, or read the extended transcript:

You can stream Lizzo's album "Cuz I Love You" by clicking on the embed below (Free Spotify registration required to hear the tracks in full):

Produced by John D'Amelio. Thanks to editor Ed Givnish.

Lionel Richie: A life written in song
More
Thanks for reading CBS NEWS.
Create your free account or log in
for more features.
View CBS News In
CBS News App Open
Chrome Safari Continue
Be the first to know
Get browser notifications for breaking news, live events, and exclusive reporting.