To find out what it's like to live in an architectural landmark you'd have to ask somebody who's been doing it for a while, which is just what Erin Moriarty of 48 Hours has done:

That's when Boyle and his family moved into the first home architect Wright constructed in California, and the only one in his famous prairie style.

"Walking in the door … that's all it took," he said. "When you come into this grand room you're just enchanted," he said.

"This is organic architecture," he said "It's made of natural materials. This is all redwood. It blends in with the environment, everywhere you look, you're looking outdoors. Nature is the painting."

Eighty miles north of Los Angeles in Montecito, the home is called the George C. Stewart House, after the man who commissioned it in 1909.

"Would you have written about Frank Lloyd Wright if you didn't live in one of his homes?" Moriarty asked.

"I don't think so, Erin, I really don't. We moved into the house 16 years ago and began to restore it. And at that point I felt, 'Yes, I should find out about him.'"

And what a story he found! Wright's personal life reads like a soap opera. There were numerous wives and mistresses - including one who was murdered at Taliesen, Wright's Wisconsin estate. In short, Wright's life is the stuff novels are made of. Boyle called his "The Women" (Viking). It was published earlier this year.

"I think there are unlikable things about him in here," he said, "but I admire him greatly, and I love his art. It's a moral valence. Does it matter who made the work of art, whether they're a good person or a bad person, as long as the work of art itself is great? And I don't think it really matters."

Wright's clean, linear designs - such a contrast to the ornate Victorian styles of the 19th century - were often controversial … and so was he.

"I've been accused of saying I was the greatest architect in the world and if I had said so, I don't think it would be very arrogant," Wright said in one interview.

Wright, who needed his clients' money to build his art, was often insulting to them.

"He wasn't there to please the client, was he?" Moriarty asked.

Amid the chaos in his personal life, Wright still managed to design nearly 800 buildings … including the Guggenheim Museum in New York and Falling Water in Pennsylvania.

"Could you have done your work and lived the way Frank Lloyd Wright did?" Moriarty asked.

"Absolutely not!" Boyle responded. "He seemed to need trouble in his life in order to get to work. I need the opposite. I need absolute peace and tranquility."

Boyle finds it here … in his airy, open office on the second floor of his home. Now 60 and a USC professor, Tom Coraghessan Boyle (he made up the middle name) has written 20 books of fiction. It's a prolific output for a man who once hoped to be a rock 'n' roll star. He still thinks of himself as an entertainer.

"At the very root of all art is entertainment that is fun," he said. "I'm just writing literature, and literature is an entertainment. At any level, that's what it is for."

"Is there a side of Frank Lloyd Wright that you see in yourself?" 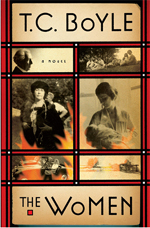 (Viking Press)
"Oh, of course. I mean, the obsessive compulsive behavior. Exclusive everything in the devotion to your work. But I try to be a little more human, you know? And a little bit of a nicer guy. And as you may know, I'm the only American writer in history only to have one wife!"

Boyle is only the fourth owner of the home, and he's restored it to the vision Wright had one hundred years ago.

"If Frank Lloyd Wright walked in right now, do you think he would be pleased with what you've done?"

"I like to think he would be," Boyle said. "But it's of course a matter of gradation. I'm sure he would find a lot of fault with everything and would rearrange everything immediately, because that's who he is."

"Do you have any idea what you paid out to get the house in this shape?"

"It's a considerable amount," Boyle said.

But there's no guarantee the house will be around for another century. Last November, the Tea fire in the Santa Barbara hills came within a half-mile of his home. And then just ten days ago …

"I was up on the roof on Friday for three hours, cutting back branches," Boyle said. "And then another two hours with the hose, spraying everything and soaking it down. And it was terrifying and exhausting. But really short of taking down this 100-year-old woods here entirely, there's not much I can do except hope and pray."