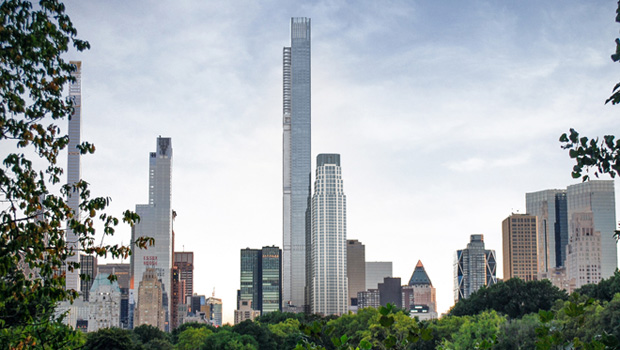 At the time most Newport, R.I., mansions were designed, elegance meant building out. Today it's all about building UP. But high-rises aren't only judged by how high they go, as reported by Lee Cowan.

Of all the Manhattan skyscrapers, the Empire State Building finds itself in a curious position. Just look up at all its lofty, modern neighbors. They're rail-thin, like beanstalks sprouting above a forest of older, huskier buildings -- and there are more going up all the time.

The Central Park Tower (set for completion in 2018) will soar more than 1,500 feet -- making it the tallest residential building anywhere.

Just a block away will be another 1,400-plus-foot tower set to take the record for the world's skinniest.

These "super-talls," as they're called, will eventually make Manhattan look more like a pin cushion, changing the skyline one really expensive condo at a time.

"It's not quite a closet," developer Bruce Eichner laughed. "It's a bit of a grand space."

And there's no other part of the city where you're going to have this grand a view.

Eichner is counting on the wealthy to buy into this sky-high, skinny venture. And how much might they pay for such a view? "For the full-floor, which this is, the price is approximately $20 million."

The building is 65 stories tall, but with a tiny footprint. The building at its base is 75 feet wide. "And then it walks out each floor, about four-and-a-half inches a floor," said Eichner. "So when you get to the top of the building, you're 105 feet wide."

They're like giraffes balancing on one foot -- remarkable from an engineering standpoint, but perhaps more remarkable is they exist solely because there are enough people willing to pay enough to live way up there.

Willis started the museum in 1997. What's different today, she says, is these new skyscrapers aren't so much monuments to corporate capitalism, as they are monuments to personal wealth.

"They're the 21st century version of the Woolworth Building or the Empire State Building -- a place where individuals can own a piece of the sky rather than a company or a developer," Willis said.

There is, of course, a cost to building so high, and it comes in the form of greenhouses gases -- whether it's the Wilshire Grand (under construction in Los Angeles), or the Salesforce Tower (soon to be coming to San Francisco). The production of the cement used to build them emits carbon into the atmosphere, contributing to global warming.

But in a forest in Southern Oregon, nature's renewable skyscrapers -- trees -- may just provide a more sustainable answer.

As they grow, trees take carbon out of the atmosphere, and even after they're harvested they store that carbon.

So Lone Rock Logging has decided to send some of its trees to a special mill that turns them into a new kind of "green" high-rise building block.

"It's going to change the way we build here in the U.S.," said John Redfield, the chief operating officer at that mill, D.R. Johnson. It's the only lumber mill in the U.S. certified to make cross laminated timber (CLT).

It's made by gluing together layer after layer of wood planks at 90 degree angles, then pressing it all into a thick panel.

Though man has been building with wood since we've been building anything, what makes CLT unique is that it's as strong as steel -- and up to five times lighter than concrete, making CLT panels perfect to build a high-rise.

Architect Thomas Robinson designed a four-story all-wood building in Portland using CLT. It's similar to buildings in Europe, which has been using CLT to build high-rises for years.

The U.S. Department of Agriculture has wanted to spur more tall wood buildings here in the U.S., so two years ago it announced a $3 million prize for the best all-wood design.

Robinson's was one of the winners -- a 12-story, all-wood big brother to his shorter version, set to be built in downtown Portland later this year.

There are skeptics, however, especially when it comes to fire, but Robinson has an answer for that, too: "People don't realize that wood has an inherent fire resistance when it's actually large," he said, "and it doesn't lose its strength as it burns."

That, combined with a smaller carbon footprint, is starting to grow on a lot of folks.

And, says John Redfield, the look and smell of wood doesn't hurt, either.

"When's the last time you seen somebody hug a concrete column?" Redfield laughed. "They don't! But they sure like to hug trees!"

Wood high-rises likely won't reach as tall as those made of steel and concrete, but they'll crane a few necks for sure.

Skyscrapers of whatever material are signatures of our cities. They are time capsules of design that represent not only who we are, but what, and where, we'd like to be.

Liz Cheney on Jan. 6 insurrection and the "ongoing threat"