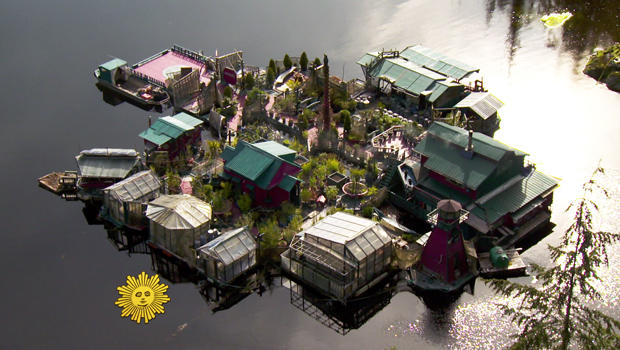 While many people have made a houseboat their abode, Lee Cowan has found a designing couple who's taken the idea of waterborne living even further:

Wayne Adams rarely sets a foot on dry land … not even when he makes his way home to his wife, Catherine King, because their home ebbs and flows with the tide.

"I remember phoning my parents from town and I said, 'We're living out on the ocean,'" King said. "And my dad said, 'What do you mean you're living on the ocean?'"

Their home is Freedom Cove, a multi-colored floating refuge way past the end of any road -- tucked away in rugged Clayoquot Sound, off the west coast of British Columbia's Vancouver Island.

Cowan asked, "What do you say to people who think this is a little odd, or a little strange?"

"Thank you very much!" Adams smiled. "Yeah, truly. It's nice to be recognized for who I am!"

They've lived this waterworld lifestyle for the last 25 years, building and rebuilding. It all sits atop about a dozen interlocking steel docks that Wayne salvaged from an old fish farm. In fact, everything here is fashioned from reclaimed material -- a habitat designed from what's available when it's available.

Adams takes particular pleasure out of re-arranging it all -- towing parts of his home around like a buoyant jigsaw puzzle.

"It's flexible, it moves in storms," Adams said. "It goes up and down and around and around about 20 feet. So it's pure psychics, and a pure experience thing, and you learn by doing."

It's as much a design project as it is an art project. In fact, both Adams and King are artists by trade -- carvers mostly. That's what brought them out to the wilderness in the first place.

The nearest town is 10 miles away (by boat). They make the trip every few weeks, but mostly this is a subsistence lifestyle. They grow almost everything they eat on their floating farm.

"Nothing like fresh potatoes from the garden," said King. "Yeah, and we had a lot last year," Adams added.

King tends the garden come rain or shine. "Gardening is my passion," she said. It is, she admits, "a passion, and a necessity."

They are willing castaways, wanting for little more than the seals do -- the ones that play in their front yard.

They have a waterfall for fresh water … timber for heat … and the sun to charge their on-board batteries (when it's not raining).

Cowan asked them, "Does it ever get lonely? Do you feel lonely? I know you have each other, but ..."

Adams said, "I like people. I'm a people person, too. I like folks, but in doses. I don't mind my own company."

It's not an easy life, but when your version of feeding the birds is feeding bald eagles, the freedom of floating has a way of anchoring you to what really matters.

"At this point," King said, "we would like to be here 'til the end of our days, if we can make that possible."

"Till the toe tag, brother!" Adams laughed. "Yeah, that's the plan. We came and made it home."

A home not so much off the grid, as it is in tune with everything else.