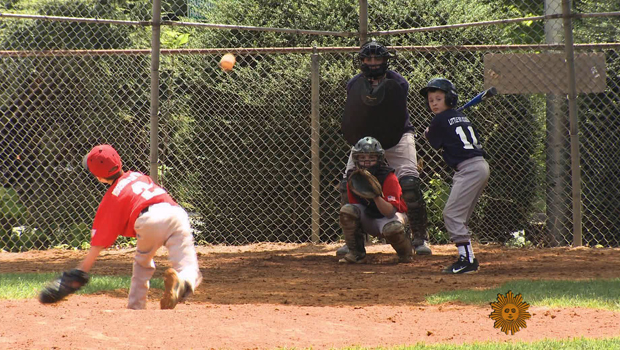 This season marks the 75th anniversary of Little League Baseball.

I was involved with Little League 12 of those 75 years - four as a player, and eight as a coach on this very diamond, in Ridgewood, N.J.

But some things were not in the coach's manual, like how to pick a team.

One coach said, "I try and pick the kids that have the best-looking mothers!"

Nothing in the coach's manual about dealing with player grievances, like being banished to the outfield. "It stinks," said one young player. "Hardly anybody hits the ball here."

Kids have been complaining about playing the outfield since 1939, the year that the first Little League pitch was thrown in Williamsport, Pa.

"The first year we played, the field was a sandlot," said Tuck Frazier, who was there at the start, playing shortstop. "But we did have some bees out in right field, so you had to watch the right fielder now and then."

Is he proud of being in that first group? "Oh, yeah," said Frazier. "We were all friends, we're still all friends. We were lucky being in the right place at the right time."

Carl Stotz, a local lumberyard clerk, created Little League with a few bucks. The headquarters was in the trunk of his car.

"The first time I saw Carl, he came into our Sunday school class," recalled Frazier. "And he said, 'How would you guys like to play baseball with uniforms, have people watch you and have team?' There were three teams: Lycoming Dairy, Jumbo Pretzel, and Lundy Lumber."

Carl's idea was a hit -- a home run -- exploding with the baby boom and the Little League World Series, on network television!

"Today we have probably about 2.5 million kids playing on close to 200,000 teams in 85 countries," said Steven Keener, who presides over Little League International's headquarters and museum in Williamsport.

Over its 75-year history, Little League has had to keep up with fast-changing times, embracing integration in the '50s.

"We had one Little League program, the Cannon Street YMCA Little League, it was an all-black league. All the other Little Leagues in South Carolina were all-white," said Keener, "and they refused to play the black kids. So to credit Little League International at the time, they said, 'Either you play or you forfeit."

"Up until that point, Little League had a rule that did not allow girls to play," said Keener. "With hindsight, that was pretty foolish. Today we have thousands of girls playing Little League Baseball."

To be sure, Keener said, Little League has always considered itself more than a game. It's about "learning to work together as a team; learning the value of sportsmanship; learning to respect authority with umpires. If those are the values they can take from this program, they're going to be better people."

Of course, if you ask the kids what's most important, they respond, "Winning!"

"How about sportsmanship, and being on a team? "Oh yeah," they replied.

More than two decades after I coached here in Ridgewood, things remain pretty much the same.

It's kind of nice to know that a few things remain fundamentally unchanged as time goes by.

Woody Harrelson pens poem for baby girl who looks like him
More
Thanks for reading CBS NEWS.
Create your free account or log in
for more features.
View CBS News In
CBS News App Open
Chrome Safari Continue
Be the first to know
Get browser notifications for breaking news, live events, and exclusive reporting.