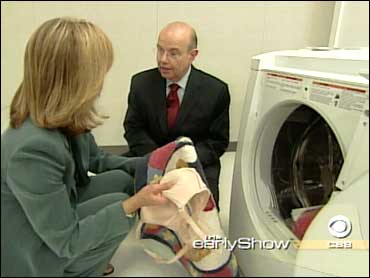 Many people use clothes dryers in their homes all the time but, reports CBS News Correspondent Susan McGinnis, they can be more of a fire threat than you might think.

McGinnis points out on The Early Show that dryers cause more than 15,000 house fires every year.

This is the first in a series of broadcasts on fire safety during National Fire Prevention Week. The second concerns fire safety devices for homes.And those who've lived through them, such as Kelly Peterson, say they can happen in an instant.

"It's a household appliance," Peterson told McGinnis. "You don't think of it as something that is deadly."

But her dryer started a fire that engulfed her house.

"It just went up in flames," she says. "It just ignited."

Peterson had been drying a small load of clothes, when she smelled something burning.

"And I ran to the basement," she recalls, "and the dryer was smoking; smoke was coming out the back of the dryer."

Peterson grabbed her two daughters and ran outside. By the time the fire department got there, her house was destroyed.

"Everyone I talked to could not believe the devastation that was caused by a dryer," she observes. "We lost everything. I mean, we literally had the clothes on our backs and that was it."

Peterson says you can never be too careful: "I will never, ever leave the house or go to bed with the dryer running. To think that families are at risk because they just don't know, is the scariest thought of all."

Every year, McGinnis says, dryer fires cause millions of dollars in property damage, and injure hundreds of people.

That could leave many homeowners wondering if their dryer could be at risk and, warns safety engineer John Drengenberg, "Depending on the factors, a dryer fire could happen in any home."Drengenberg is an engineer with Underwriters Laboratories, an organization that sets safety standards for home appliances.

He says many dryer fires are caused by something you'll find inside every machine: plain old lint.

"When the lint builds up in the lint trap, it prevents the proper airflow in the dryer from the way it's designed to do," Drengenberg notes.

And that can cause parts inside the dryer to overheat, and catch fire.

So, Drengenberg advises, dryer lint traps "should be cleaned either before or after every load."

He says, over time, dryer exhaust pipe can also get clogged with lint, causing a dangerous buildup of heat.

Drengenberg adds that a professional should clean out the pipes at least once a year, and you should check your outside exhaust vent for blockages "to make sure there isn't a squirrel's nest in there, or some debris. You want it free and clear."

But blocked vents aren't the only culprit.

Some things simply shouldn't be put in dryers. Even common items, such as garage rags stained with motor oil or gasoline, and aprons, dish towels, or napkins stained with cooking oil.

All can ignite, even if they've been washed, Drengenberg stresses: "The detergent won't get all of it out, and putting it in the dryer could cause … spontaneous combustion."

Another hazard: anything made of rubber or plastic, such as baby diaper pants, bath mats, even foam-padded bras. All could catch fire in a dryer and should be dried outside, or elsewhere in the house, Drengenberg advises.

Experts say there are warnings to look for.

If your machine isn't doing a good job drying your clothes, it could be a clue that the exhaust pipes are getting clogged with lint, and you should get them cleaned out as soon as possible.

With proper maintenance, some experts say, there shouldn't be a problem with your leaving the house or going to sleep with your dryer running, but other experts say flat-out you should always be there and awake then dryers are in use.

And if you smell something burning, or if you see smoke or fire coming out, get everyone out of the house, and call 911.

This is the first in a series of broadcasts on fire safety. The other topics include fire-safety devices.