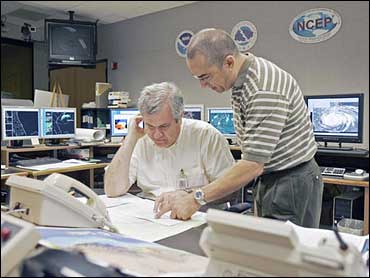 Ophelia has dropped slightly in strength from hurricane to tropical storm, but was still along the coast of the Carolinas.

Although Ophelia was centered more than 200 miles offshore late Monday, nonresidents were ordered to leave one of North Carolina's Outer Banks islands and 300 National Guard troops were sent to mustering points along the coast. Schools in five counties closed, even though the storm's eye was predicted to remain offshore until Wednesday.

Many people acknowledged they were paying closer attention to Ophelia because of the vast destruction caused by Hurricane Katrina along the Gulf Coast. Others insisted they wouldn't let the milder storm disrupt their plans.

"My family is all coming in for a family reunion, including my 84-year-old mother," said Dodie Curtis, 62, of Gilford, Maine. "We don't plan to go anywhere unless it gets a lot worse."

Gov. Mike Easley said the U.S. state has "a great deal of experience with hurricanes" and was doing its preparation.

Ophelia was a minimal hurricane early Monday with sustained winds of 75 mph, but by midday it had weakened to about 70 mph, 4 mph below the threshold, the U.S. National Hurricane Center said.

Meteorologists warned, though, that the system had the potential to regain hurricane strength over the next day or so.

At 8 p.m. EDT, Ophelia was centered about 160 miles east-southeast of Charleston, South Carolina, and 260 miles south-southwest of Cape Hatteras, the hurricane center said. It was moving northwest at about 4 mph with a gradual turn to the north expected during the next 24 hours.

The storm's slow movement is its primary danger and it could hang over eastern North Carolina for days, Easley said. Floods, prolonged power outages and severe wind damage were possible as Ophelia crawled north.