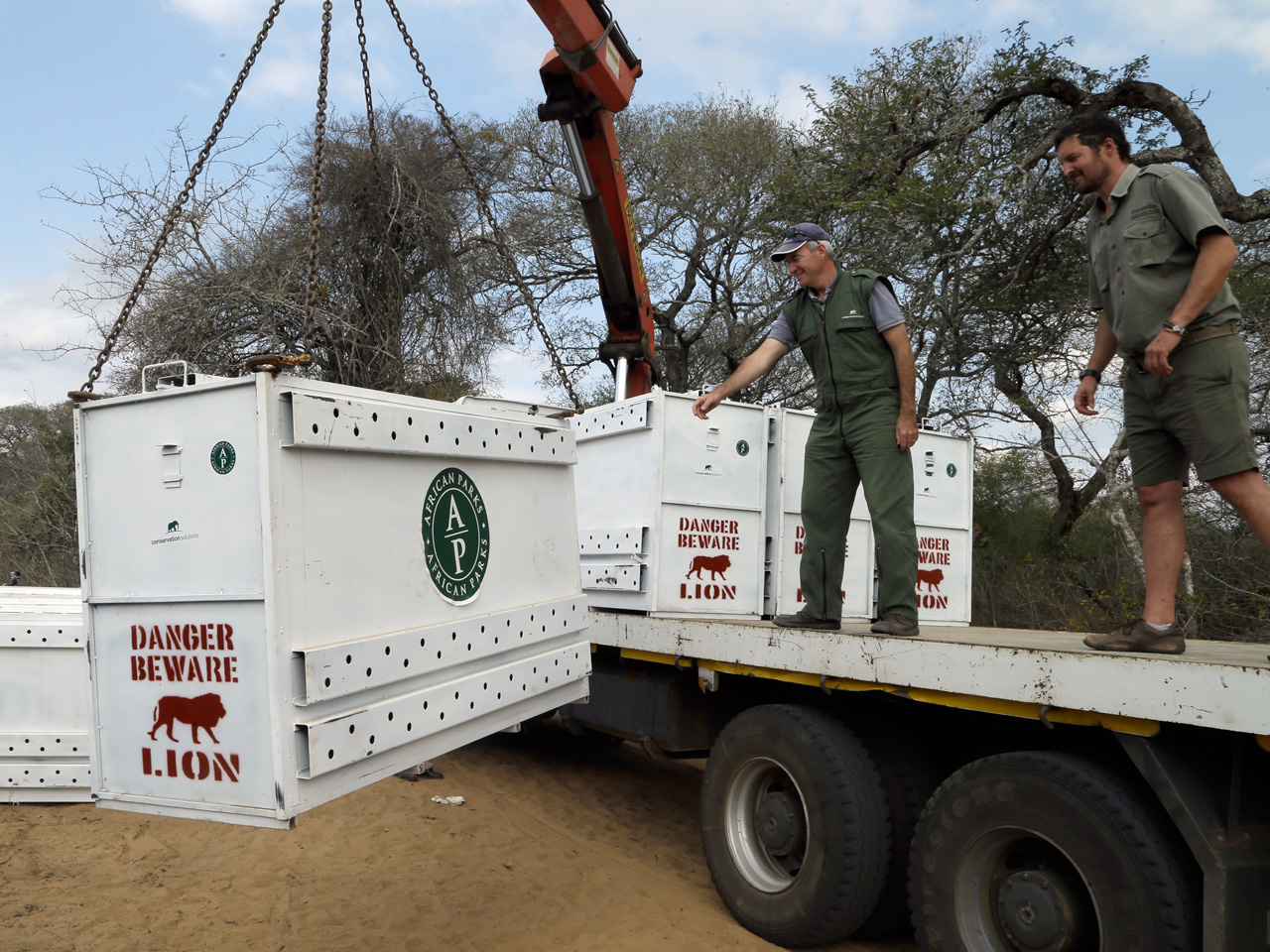 PHINDA PRIVATE GAME RESERVE, South Africa - The sedated, blindfolded lions lay in the dirt, unwitting passengers about to embark on a 30-hour, 2,500-mile journey by truck and plane from South Africa to Rwanda, whose lion population was wiped out following the country's 1994 genocide.

Then conservationists hoisted the limp bodies into crates, grasping big paws, thick tails and even the imposing heads of animals that earlier pounced on an antelope carcass used as bait to bring them closer to a veterinarian with a tranquilizer gun.

The operation this week to move seven South African lions to Rwanda in east-central Africa is an upbeat tale in an otherwise challenging picture for wildlife on the continent, where poaching has surged and human encroachment is shrinking habitats. Lions are designated as vulnerable on an international "red list" of species facing threats. By some estimates, there are fewer than 20,000 lions in the wild, a drop of about 40 percent in the past two decades.

"There's just no room for them and they're being pressurized and pressurized," said Dr. Mike Toft, a wildlife veterinarian who darted five female lions Monday at the Phinda Private Game Reserve in South Africa's KwaZulu-Natal province. An Associated Press writer and photographer watched as crane operators loaded the lion crates onto a truck that arrived with two male lions from nearby Tembe Elephant Park. The vehicle then drove to Johannesburg for a charter flight to Rwanda.

The lions' new home is Akagera National Park, where cattle herders poisoned Rwanda's last lions about 15 years ago after the park was left unmanaged in the genocide's wake. Returning refugees took over much of the park, reducing its size by more than half to 433 square miles in 1997, according to African Parks, a Johannesburg-based group that manages Akagera and other national wildlife parks in Africa.

The non-profit group organized the lion transfer to Rwanda, which hopes to boost a wildlife tourism industry that focuses on mountain gorillas. African Parks tried in vain to secure lions from Kenya, Uganda and Tanzania that are genetically closer to Rwanda's old lions.

Rwandans should celebrate the return of lions, wrote a columnist in The New Times, a Rwandan newspaper.

"We didn't treasure what we had (lions) until they were gone," Sunny Ntayombya wrote. "Then we scrambled around, cap in hand, begging different African countries to spare a cat or two."

At Phinda, the five lionesses bound for Rwanda were unexpectedly joined in their holding pen by three other lions that burrowed their way inside. Toft had to dart all eight before workers could enter to fasten satellite tracking collars on the five lions earmarked for travel to Rwanda.

The sedated lions looked vulnerable, jarring with the popular notion of lions as animal royalty. They were blindfolded with cloth and park staff and others moved quietly and spoke softly to reduce the chance of any lion awakening. Some photographed the lions' faces, a close-up opportunity to appreciate a carnivore that has symbolized bravery and inspired "Born Free," ''The Lion King" and other successful books and films.

This month, the International Union for Conservation of Nature noted successful lion conservation in southern Africa, but said lions in West Africa are critically endangered and that rapid population declines have also been recorded in East Africa. A national park in India also has lions.

A trade in lion bones and other body parts for traditional medicine in Africa as well as Asia is considered a growing threat. And lions can easily come into conflict with rural communities that depend on livestock.

A lion that escaped from South Africa's Karoo National Park three weeks ago was captured Monday, authorities said. A veterinarian darted the lion from a helicopter, which lifted the animal in a sling off a mountainside.

The Rwanda-bound lions arrived Tuesday at Akagera, where they are being kept in quarantine for at least two weeks before their release into the wilderness.

The two males each weigh about 550 pounds and are known to have fathered at least 12 cubs. Andrew Parker, joint operations manager for African Parks, said he expected Akagera's lion population to grow "quite quickly."

Toft, the veterinarian, said Rwanda's new lions have a "diverse" genetic makeup and that inbreeding should not be a concern for a while. South Africa, he said, could supply more lions to the continent because of robust numbers on its small, fenced reserves.

"Our lions thrive," he said. "We could easily repopulate many reserves."