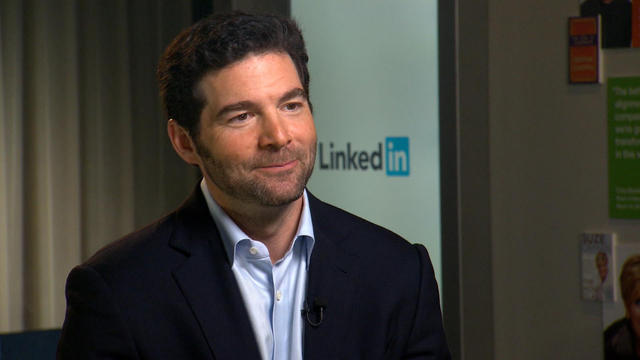 With more than 530 million users, the social networking site LinkedIn is gaining two new members every second. The man behind the company's success is CEO Jeff Weiner. He joined the company in 2008, and has incorporated compassion into his philosophy of leading his employees.

"Compassionate management, compassionate leadership is about taking the time to put yourself in another person's shoes. I think within a company, a business, a team -- I like to do that to help the other person achieve their objective or achieve what it is that you're trying to accomplish together more effectively," Weiner said.

But the LinkedIn chief admits that compassion wasn't always his strong suit. Some have said he can be harsh.

"As we're rattling off that list of things I could do better -- very intense. And the intensity wasn't always channeled in a constructive way. I'm still intense, but I'm more conscious of how to manifest that intensity more constructively," he said.

In just eight years, Weiner has grown LinkedIn's small staff of 338 to over 11,000 employees in various offices around the world.

"It's important that we laugh and have fun while we're doing what we do, or at least are in an environment where we can try to have some fun," he said. That fun includes a ping pong table at their headquarters.

Asked what some of the biggest mistakes CEOs make, Weiner said, "I think, speaking from my own experience, the biggest lesson I've learned in the role of the CEO is not to leave the pitcher in the game for too long."

"But no pitcher says, 'Take me out coach! I'm ready to come out,'" King countered.

"I like to, in those moments, sit down with the person and be as transparent as possible," Weiner said of how he handles firing an employee. "But there's going to be a timetable. And, you know, depending on the person, depending on the role, depending on the gap, that timetable may shift. And between now and the end of that timetable, I'm going to be just completely open with you in terms of how you're doing, 'cause we're in this together. And if, for whatever reason, it doesn't work out, maybe we can look for another role for you within the organization. And maybe it means transitioning you out of the organization."

Under his leadership, LinkedIn has expanded substantially. The professional networking site recently introduced a new video component for its 500 million users.

"Some of these young adults who were born in this country or brought to this country -- certainly it wasn't their choice -- are some of the most inspiring, talented people I know and I've had the privilege to meet," Weiner said. "Forty percent of the Fortune 500 was founded by immigrants or the children of immigrants. So you think about all the value that's been created as a result of people who are seeking a better life for themselves and their families and the people that they're responsible for. It's how the United States was built."