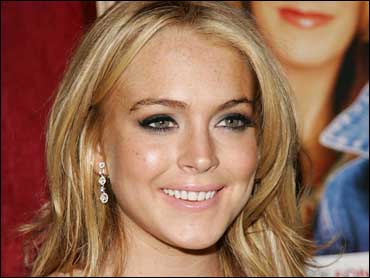 The move followed a weekend during which the wild-child actress, who is a month shy of her 21st birthday, crashed her Mercedes, was arrested for suspicion of driving under the influence and was photographed slumped in the passenger seat of a friend's car.

Lohan "admitted herself to an intensive medical rehabilitation facility" on Monday, according to a statement released by her publicist, Leslie Sloane Zelnick.

The statement added, "Because this is a medical matter, it is our hope that the press will appreciate the seriousness of the situation and respect the privacy of Lindsay as well as the other patients receiving treatment at the facility."

This is Lohan's second rehab stint this year. She said in January that she had checked into a rehabilitation center for substance abuse treatment.

Lohan was arrested Saturday morning on suspicion of driving under the influence after her car hopped a curb and hit a shrub on Sunset Boulevard.

Witnesses called police, who arrived to find both Lohan and the vehicle missing from the accident site, said McCann.

"We tracked down the vehicle to a nearby apartment complex and tracked down Ms. Lohan to a Century City hospital," he said Tuesday.

The case remains under investigation, McCann said. Lohan could face additional charges for leaving the scene, he said, adding "we would take into consideration that she was injured and transported to a hospital."

Her preliminary court date is scheduled for Aug. 24. She will be represented by attorneys Blair Berk and Jason Sloane. Neither returned calls for comment Tuesday.

Lohan was back out on the town before the Memorial Day weekend was over. Photographers captured her slumped in the passenger seat of a friend's car early Monday morning. The photos, posted online, show a sweatshirt-clad Lohan with her mouth open and her eyes shut, apparently asleep.

"The world has been very hard on her," said Michael Heller, an attorney and Lohan family friend. "She has a lot of personal issues and family issues. There's an incredible amount of pressure on this 20-year-old."

He also noted on Tuesday that Lohan has "gone from one movie to the next," spending long stretches of time away from her family.

"She's living in a hotel," he said. "It's a very lonely existence."

Lohan's mother, Dina Lohan, told Us Weekly magazine earlier this month that when her daughter isn't working, "she's so bored."

"I've told her, 'Please slow down. Stop!' She's growing up and learning to do that. She really loves the business," the mother said.

Lohan was originally set to begin work this week on "Poor Things," a comedy starring Shirley MacLaine, Olympia Dukakis, Rosario Dawson and Channing Tatum, the trade paper Variety reported Monday. The company behind the project, Still Rolling Productions, did not return calls or e-mails from The Associated Press Tuesday.

Photos: A Year of Lohan

Lohan did her first movie at age 11: Disney's remake of "The Parent Trap." Her breakout role came in 2004's "Mean Girls." She released her debut album that same year.

Her other screen credits include "Freaky Friday," "Bobby" and "A Prairie Home Companion."

Her most recent movie, "Georgia Rule," is in theaters now. During its production last summer, one of the film's producers chastised Lohan for her "various late arrivals and absences from the set."

"We are well aware that your ongoing all night heavy partying is the real reason for your so-called `exhaustion,"' James G. Robinson wrote in a letter made public in July 2006.

"This is a time when she will reflect backwards and think forward," Heller said. "Hopefully she will plan a future that will be fruitful artistically, professionally (and) take a place in society that will be appropriate for someone of her standing."