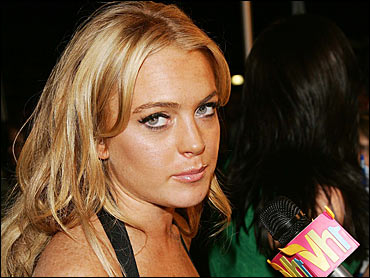 Lindsay Lohan was arrested on suspicion of driving under the influence Saturday after her convertible struck a curb, and investigators found what they believe is cocaine at the scene, police said.

Lohan, 20, and two other people were in her 2005 Mercedes SL-65 when it crashed on Sunset Boulevard around 5:30 a.m., Sgt. Mike Foxen said. It appeared the actress was speeding, Lt. Mitch McCann said at an afternoon news conference.

Officers at the scene found a "usable amount" of a drug tentatively identified as cocaine, McCann said. He declined to say where the drug was found other than to say Lohan was not carrying it.

Lohan, who spent time at a rehabilitation center earlier this year, was driven in another car to a hospital for treatment of minor injuries, McCann said. The two other people in her car were not hurt.

Officers received a 911 call about the accident and arrested Lohan at the hospital for investigation of misdemeanor driving under the influence of alcohol or drugs, McCann said.

She was released from custody because she was admitted to the hospital, police said.

Photos: A Year of Lohan

McCann declined to comment on Lohan's blood-alcohol level. He said the case will be presented to the District Attorney's Office where the actress could face more charges, including felonies. Her tentative arraignment date is Aug. 24.

Months earlier, Lohan collided with a minivan when she made a U-turn as the van, carrying paparazzi, followed her from a Los Angeles restaurant. A photographer was arrested for investigation of assault with a deadly weapon but prosecutors declined to charge him.

That crash was credited with prompting Gov. Arnold Schwarzenegger to sign a law that set steep financial penalties for paparazzi who commit assaults while trying to obtain celebrity photos.

The actresses father, Michael Lohan, gave an exclusive statement to
http://www.X17online.com regarding the charge against his daughter.

The statement reads, in part:

"Lindsay needs to find God, get better, clean house and start all over again with the people who were there with her at the beginning: her family. Too many people are around Lindsay for the wrong reasons. They want to see what they can get from her instead of caring about Lindsay herself. I'm her father. I don't want anything from her but her love and to be her father first. I'm here for Lindsay as a father and a father only."

Lohan said in January that she had checked into a rehabilitation center for substance abuse treatment. Her publicist confirmed in December that the actress was attending Alcoholics Anonymous meetings.

Lohan told Allure magazine during an interview for its May issue that she decided to enter the secluded Wonderland Center at the suggestion of her therapist.