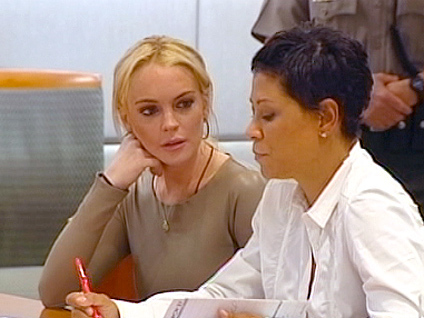 (CBS) Lindsay Lohan arrived at court about 35 minutes late Thursday morning. Inside the courtroom, Judge Keith Schwartz said the case is set to move toward trial.

Pictures: Lindsay LohanPictures: Lohan charged with theftPoll: Is she dressed appropriately for court?

Lohan rejected a plea deal. A pre-trial hearing is set for April 22 with a different judge. E! Online reports that the plea deal contained an offer of six months in county jail for a guilty from Lohan.

The maximum sentence in California Lohan could face is three years in state prison. If Lohan agrees to plead guilty or no contest by March 25, Schwartz will take the April 22 court date off the calendar.

Lohan, 24, has been accused of stealing a $2500 necklace from jewelry store Kamofie & Co. She pleaded not guilty to felony grand theft on Feb. 9.

At one point, Schwartz spoke sharply to the people appearing before him for leaking so much information to the press. Stories about the plea deal have popped up online for several days. He did not admonish Lohan for being late.