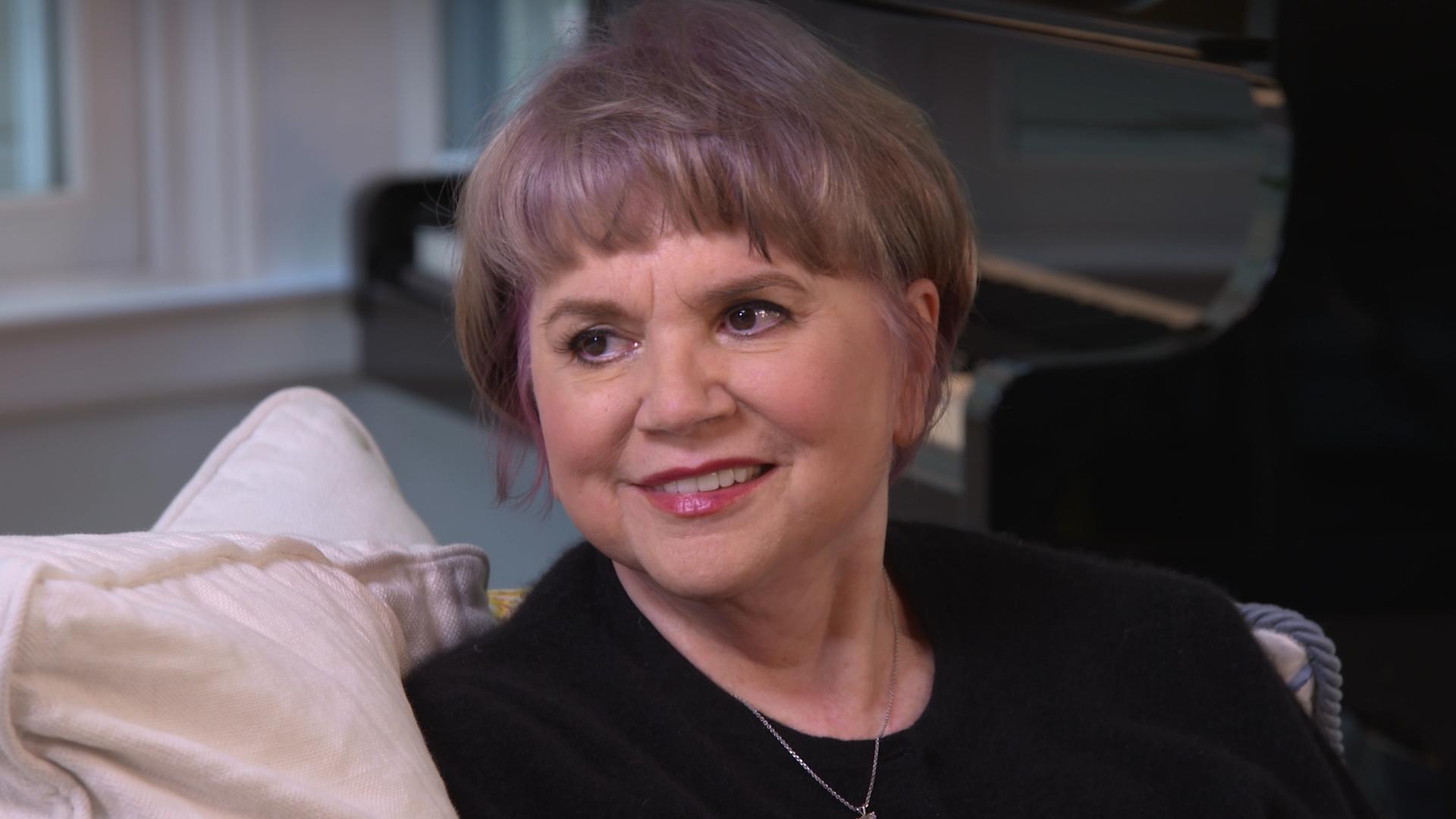 Linda Ronstadt quit performing years ago – her Parkinson's disease makes singing impossible. But last fall, she spoke to a sellout crowd at The Theatre at Ace Hotel in Los Angeles, who came to see her in person, and listen to her talk about what has been a magical life.

The crowd basked in Ronstadt's tales of her life and career, such as when she toured for four months as the opening act of The Doors: "It was pretty tough to play with The Doors. It was kinda like a double bill of 'Bambi' and 'Deep Throat'!"

Correspondent Tracy Smith asked Ronstadt, "What's it like to get that kind of warmth when you're just talking?"

"I was just astounded. I mean, it made me feel good, but I was glad they didn't boo, or start yelling for 'Heat Wave'!"

And you know she's heard that before.

In case you need a reminder, Ronstadt was a musical force of nature who sold 100 million records, had four consecutive platinum albums, and won an armful of Grammys for songs in wildly different music styles, like country, Latin and pop.

For much of her career, she practically lived on the road. But these days, her world is a bit smaller:

She mostly keeps to a San Francisco neighborhood close to the famous bridge, and a house on a quiet street where it seems she has now become the world's most famous couch potato.

These days she spends much of her time reading. "I can't do a lot of things that are active," she said. "I can't spend very much time on my feet, or even very much time sitting up. I have to kind of lounge around. But I'm lazy, so it's a good thing that I lounge!

"So, I'm glad to have the leisure time. I have a huge stack of books that I need to read."

Smith asked, "When you think about those songs, in your mind, can you still sing?"

"Oh, I can sing in my brain; I sing in my brain all the time. But it's not quite the same as doing it physically. You know, there's a physical feeling in singing that's just like skiing down a hill, except better, 'cause I'm not a very good skier!"

But she was a very good singer:

For more than four decades it seemed there was nothing Linda Ronstadt couldn't do, until she sensed that her voice was beginning to fail her.

Smith asked, "When did you start noticing there was something wrong with your voice?"

"2000," she replied. "I'd start to sing and then it would just clamp up. It was, like, a cramp. My voice would freeze. And I said, 'There's something wrong with my voice.' And people would say, 'Oh, you're just a perfectionist.' I go, 'No, there's really something systemically wrong.'

"And it's very slow-moving, this disease, so it took a long time to really finally manifest."

She played her last show in 2009, but it wasn't until 2013 that she revealed she'd been diagnosed with Parkinson's.

She'd retired before she knew what was happening: "Oh yeah. I was just yelling. Instead of singing, I was just kind of yelling. I didn't want to charge people for that."

"Do you think other people heard it, too, really?" asked Smith.

"Yeah, yeah. But I mean, it wouldn't have mattered. I could hear it. It wasn't any fun anymore. You know, singing is … there are really a lot of things you can do with your voice; you can slide on all different sorts of textures and things. And if you're not doing that, it's not interesting."

And she always tried to keep it interesting. Besides her solo work, she teamed up with some of the greatest voices in the business.

To watch Linda Ronstadt perform with Dolly Parton and Emmylou Harris on "The Late Show with David Letterman," click on the video player below:

"No record company wanted to touch that," Ronstadt said. "Called us the 'Queenston Trio.'

"It's an amazing thing, when you sing with somebody. It's a very intimate relationship. It's almost like sex. It's as intimate as sex, but it's not sex. It's different. It's that intimate. It's like a great love affair."

Her own love affair with music started when she was a kid growing up in Arizona in a musical family, learning to sing and play the guitar.

She was, and is, an independent spirit, from her career choices to her relationships, like her much-publicized romance with former California Governor Jerry Brown.

She says she still talks with Brown. "Yeah, he was here for Thanksgiving."

"It seems like you've managed to maintain relationships with people who were in your life," Smith said.

"I don't know why they're still speaking to me, but they are!"

"Why didn't you ever get married?"

"I was not cut out for marriage," Ronstadt replied. "I used to dream that I was gonna get married, and I'd go, 'I'm too young to get married.' And this was when I was, like, 45, you know? And I'd go, 'I can't get married. I'm too young.' So I guess that means I'm just really immature! I'm not good at compromising."

"You know this about yourself?"

But her refusal to compromise helped her reach the heights of artistic achievement, and take home countless awards, including the National Medal of Arts in 2014, presented by an admittedly smitten president.

Smith said, "President Obama confessed, or admitted, to having a crush on you."

"Oh, he was being nice to a 70-year-old woman in a wheelchair," Ronstadt said.

"How about that medal? Do accolades like that mean something to you?"

"Well, it's kinda big! I didn't know what to do with that. I put it under the bed. It's under my bed, with my crowbar that I have for in case there's an earthquake and I have to pry the roof off myself. I have a crowbar and medal under the bed!

And who knows, there could be even more awards on the way: Last week she came out with a new live album – her first ever – made from newly-uncovered tapes of a made-for-TV concert in 1980, when she was at the height of her vocal powers.

To watch Linda Ronstadt perform "You're No Good," from her new album, "Linda Ronstadt Live in Hollywood," click on the video player:

Now, she says, she can't even sing in the shower.

"Yeah, but it doesn't, I can't make sound," Ronstadt replied.

"They've talked over the years about various treatments that could make singing come back."

"I'm sure they'll find something eventually, you know? They're learning so much more about it every day.

"I mean, I'm 72. We're all gonna die. They say people usually die with Parkinson's. They don't always die of it, because it's so slow-moving, so I figure I'll die of something. And I've watched people die, so I'm not as afraid of dying. I'm afraid of suffering, but I'm not afraid of dying."

And ever the performer, she says she'd like to go out singing.

"That's the way I'd like to die, is right in the middle of a note!" she said.

As of right now, there are no more "Conversations With Linda Ronstadt" on the books. But at 72, she's learned never to say never. And at the end of her appearance in L.A., as she started to leave the stage, she hesitated for just a moment. Maybe that's because, like her millions of fans, Linda Ronstadt is not quite ready to say goodbye.

Live music is back on stage 2022
More