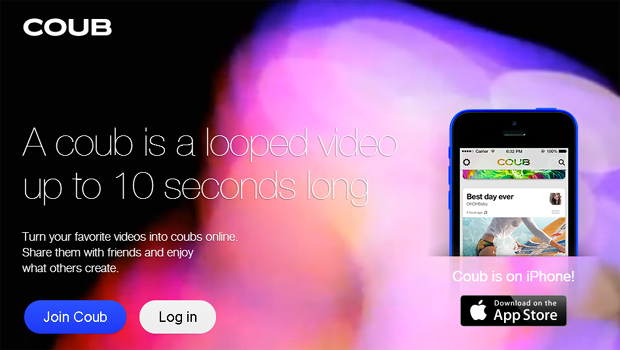 Inspired by looping videos like GIFs and Vines that have kept millions of Web and mobile users entertained for countless hours, a startup called Coub is adding an extra layer of creativity to the mix. Coub not only allows users to easily trim, loop and embed ten-second videos, it also lets them add music or sound effects that lend a dramatic, comical or sometimes psychedelic tone.

Anton Gladkoborodov, the CEO who co-founded Coub in Russia in 2012, told CBS News that he has been a big fan of GIFs since the early 2000s. In fact, he says, he "made tons of trashy, artistic GIFs," managing a LiveJournal community dedicated to GIFs a long time ago.

In a way, he says Coub was inspired by GIFs. That does not mean that a Coub is better than a GIF; rather each format has its pros and cons. With sound and video available with Coub, "you can make things that you can't make in GIF," Gladkoborodov said in an email.

The Coub website, like YouTube, has "Featured Channels," with topics ranging from sports like surfing to "Silence Reinvented," which includes clips from silent movies and videos that now include sound. The site allows registered users to create Coubs from their own videos, as well as videos on other services such as YouTube or Vimeo. The company has an iOS app, with an Android version in the works.

With 50 million users currently -- from 8 million a year ago, according to The Verge -- the startup has already started to gain users in the U.S. Online media sites, including BuzzFeed, Business Insider and the parody site College Humor have already made use of the new looping video service; Coub showcases their clips on the site.

The Verge also reports that Coub is looking to become an international brand, after opening its first corporate office in New York earlier this month. But Gladkoborodov rejects the idea of competition with Vine, now owned by Twitter. "We have a different type of content. Coub culture is all about mixing and mashup, while Vine is more about filming and social stuff," he explained. "Combining different pieces of content from different sources leads to unexpected results and it could be extremely viral."

Coub's blog demonstrates this creative spirit, with users highlighting the looping effect with both visuals and music.