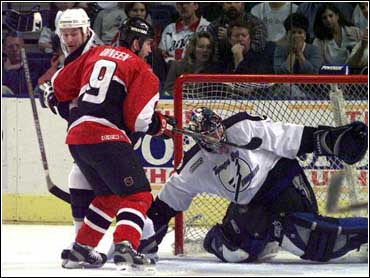 Tampa Bay scored twice after the Ottawa goalie Tugnutt misplayed the puck behind the net en route to a 5-4 victory Thursday night.

"I have to shoulder the blame," Tugnutt said. "Everything that could have went wrong, went wrong."

Mike Johnson scored two goals and added an assist to help the Lightning win consecutive games for the second time this season.

Nils Ekman gave the Lightning a 4-3 lead with 12.04 left in the third period after Tugnutt failed to clear the puck from behind the net. Ekman put a shot past the diving Tugnutt after taking a pass from Mike Sillinger.

Tugnutt also failed to control the puck behind the net on Johnson's first goal at 33 seconds of the first period.

"The first one took a bad bounce off the board and the other one, the player (Sillinger) got on me quick and lifted my stick," Tugnutt said. "Things just didn't go well for me. When an important part of your team your goaltender and things don't go well for him, it's not good for the whole team."

Steve Martins and Sillinger also scored for Tampa Bay. Zac Bierk made 33 saves in his second start of the season. Bierk, recalled from Detroit of the IHL on Tuesday, stopped 30 shots in a 4-1 victory over Philadelphia on Nov. 22.

"You get on a plane in Detroit and the next day your starting, as a goaltender, you have to try and prepare yourself whether you're playing or not," Bierk said. "As we know, anything can happen"

Vaclav Prospal had two goals for Ottawa, which remains three points behind first-place Toronto in the Northeast Division.

"We gave them to many goals," Ottawa coach Jacques Martin said. "The bottom line is we made mistakes defensively and it cost us. Whenever you score four goals, you should win the hockey game."

After Martins' goal put Tampa Bay up 5-3, Prospal got the Senators back within one with six minutes left.

Ottawa had 13 straight shots at one point, scoring twice on goals by Wade Redden and Prospal, in taking a 2-1 lead midway through the first period.

Johnson opened the scoring on Tampa Bay's first shot of the game. The Lightning then were held without a shot over the next 13 minutes.

Tampa Bay tied it at 2 on Sillinger's goal at 55 seconds of the second period, and took its first lead nine minutes later on Johnson's second of the night.

"It was an unfortunate loss for us," Zamuner said. "We didn't play like we wanted. You have to give them credit, they played well and it was a bad loss for us."

It was just the second time Tampa Bay was won when the opponent has scored more than two goals.