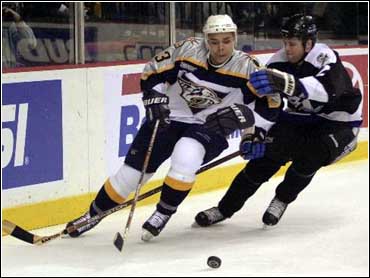 Mara ripped the game-winning slap shot from the top of the left circle through the legs of Tomas Vokoun.

The Predators outshot the Lightning 14-5 in the final period and 30-17 overall.

Right wing Mike Johnson, obtained in a trade with Toronto Feb. 9, had his second straight two-goal game for Tampa Bay. His second goal came on the power play, as he shoveled the rebound of Vincent Lecavalier's shot over Vokoun in the second.

Predators defenseman Karlis Skrastins tied it 2-2 on a power-play blast from the left point later in the period.

Johnson gave the Lightning a 1-0 lead at 15:04 of the first on a one-timer in the slot, set up by a perfect feed from behind the net by Lecavalier.

Nashville defenseman Drake Berehowsky tied it 1-1 at 19:00, crashing in from the right circle and putting Sebastien Bordeleau's feed between Bierk's legs.

Bierk was one of seven rookies among the 20 players Tampa Bay had in uniform. Chris Gratton was out with a bruised foot, missing just the sixth game due to injury in his seven-year career.