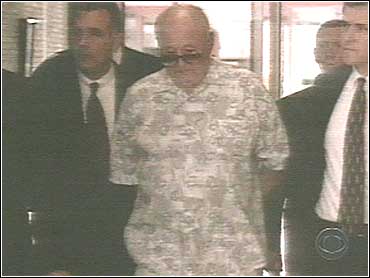 The highest-ranking military man ever accused of spying was sentenced to life in federal prison Thursday.

George Trofimoff, 75, showed no reaction as U.S. District Judge Susan Bucklew handed down the sentence. Trofimoff is a retired U.S. Army Reserve colonel and was a civilian intelligence chief for the Army in Germany at the height of the Cold War.

Trofimoff was facing at least 27 years in prison, but his sentence was increased based on the longevity and gravity of his spying career and at the request of the Department of Defense.

Assistant Secretary of Defense John P. Stenbit, writing on behalf of President George Bush, told Bucklew in a letter than anything less than a life sentence for Trofimoff would not be adequate punishment for him nor a deterrent for others who would betray the country.

Trofimoff was convicted of a single espionage count in June following a four-week trial that produced a parade of former KGB officials and international intelligence experts.

Trofimoff's spying career is believed to have spanned decades, beginning in the late 1960s or early 1970s and ending with the fall of the Soviet Union.

As head of the U.S. section of a joint interrogation center in Nuremberg, Germany, Trofimoff had easy access to secret military documents that detailed what the United States knew about its adversaries. The center was set up to debrief Iron Curtain defectors.

As he did during his trial, Trofimoff told the court Thursday that he was innocent of the charges.

During the trial, Trofimoff testified that he was a loyal American who had made up a story about being a spy to collect money to resolve his deep debts. He told his story to a man he believed to be a KGB agent, but who was really an undercover FBI agent.

Written by Vickie Chachere
© MMI The Associated Press. All Rights Reserved. This material may not be published, broadcast, rewritten, or redistributed