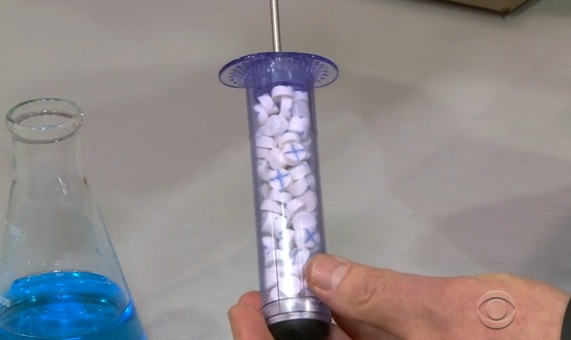 WILSONVILLE, Ore. -- When a victim suffers a gunshot wound, seconds matter. Depending on where the bullet enters, that time could mean life or death.

A team at RevMedx, Inc. in Wilsonville, Oregon, came up with a device to help mitigate excessive bleeding.

It's called XStat, and is a syringe-like applicator filled with 92 medically designed sponges that absorb blood and exert pressure on trauma wounds to stop blood from exiting the body.

The FDA cleared XStat for military use in 2014, and U.S. Special Operations purchased hundreds.

Sergeant Major Kyle Sims, a combat medic with U.S. Special Operations, said XStat has been used in a partner force in the field.

"They couldn't get the bleeding to stop in his leg and they ended up using the XStat dressing," Sims said, adding that the surgeon on location had never seen the device. "He was quite impressed and he ended up pretty amazed that it worked as effectively as it did."

For hemorrhages in areas with major blood vessels like the shoulder and groin, where XStat is intended for use, Sims says it's a tough art to pack a wound using traditional methods like gauze to stop the bleeding.

"It might take you four to give minutes to get that wound taken care of, whereas with XStat, it takes 10 to 20 seconds to get all the dressing in place," said Sims.

In December of last year, the FDA cleared XStat for civilian use. RevMedx's CEO Andrew Barofsky said they now plan to market to the country's top trauma centers.

"Our goal is to get them trained up, and get them using the device so they can provide us with that feedback on how well this device is working in the field, the best way to use it, and what types of patients respond best to this technology," said Barofsky.

Following an incident like a shooting, natural disaster, or car accident, the time XStat trims to stop bleeding can then be spent assessing other vitals.

"In the hands of the appropriately trained medical professional, this device would be an intervention and can keep somebody alive long enough to get them to the ER," said Barofsky.

XStat currently costs several hundred dollars per applicator, but that's a price the company hopes to start reducing after roll-out for civilian use this month.