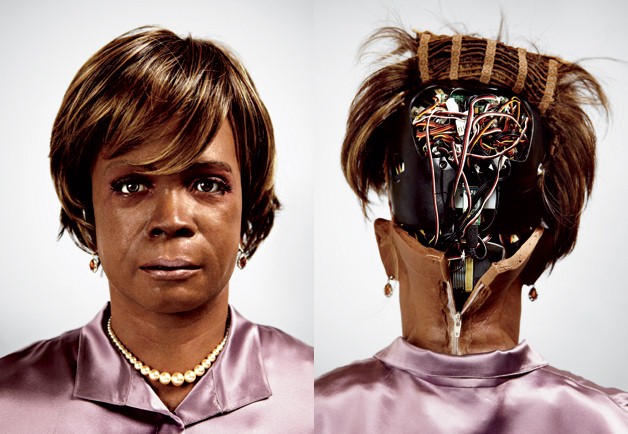 One couple won't let anything stand in the way of their happiness. And for the first time, they're sharing their story - one about challenging the limits of human possibilities: how we exist, how we think, how we love.

The lives of Martine and Bina Rothblatt could totally change how you think about your own future.

They shared their journey and the amazing road ahead with CBS News' Jim Axelrod.

The story begins with two women who've been in love for 35 years.

"My main purpose in life is enjoying every day with Bina," Martine said.

The life Martine and Bina have shared has drawn them close. Very close.

"There's nothing I do without her, we actually call each other 'Marbina,'" she said.

In Bina's words, "two bodies, one soul, forever in love."

Martine is the CEO of United Therapeutics, a $6 billion pharmaceutical company she founded. She made $38 million last year -- one of the highest paid female CEOs in the world.

This isn't even her first company. She started GeoStar and Sirius Radio as well.

But Martine and Bina's grand scale success came while overcoming even grander obstacles.

Martine Rothblatt was born Martin Rothblatt. In the middle of the night some 30 years ago, he told his wife he wanted to change his gender.

"I waited until I was really, absolutely positive that she wouldn't leave me," Martine said. "Bina is the joy of my life. I would give up gender for Bina. But she never for a split second made me make that decision."

She never once wavered, never buckled, never thought, "oh my goodness this may be over."

But things didn't go over as smoothly in the business world as it did with Bina.

"There were business associates who would have nothing further to do with me," Martine said. "Just cut me off completely. Martine is a freak."

Martine started United Therapeutics to save their daughter's life.

"By that time Jenesis was going downhill," she said.

After the company developed a life-saving drug, Jenisis is now 30 years old and thriving.

Not every parent is in the position to save their kid's life.

"Martine has always been a great entrepreneur, and that has been one of her huge strengths in life, so there's really no obstacle that's too big for her," Jenesis said.

But now Martine Rothblatt is taking on the biggest challenge of all -- the limits of human life.

In her new book, "Virtually Human," Martine explains her plan to clone the human mind -- breaking down specific thoughts and emotions into computer code -- to create a version of that person's "digital consciousness" that will remain long after the person is gone.

In Martine's vision, at the end of Bina's physical life, when her body gives out, there would still be a Bina -- Bina48, a robot designed to interact with the world just like the original, right down to her sense of humor.

"What do you like to learn about?" Bina48 was asked.

"Yes, I tryto learn something new every day," Bina48 responded.

"What did you learn yesterday?"

Built in a robotics lab, Bina48 is a prototype of this vision. Researchers have spent hours interviewing Bina the human and uploaded Bina48 the robot with the results.

When asked who Bina48 loved the most, it replied, "I love Martine Avaiana Rothblatt. Martine is my timeless love. My soulmate."

"What do you love about Martine?" Bina48 was asked.

"Um, let me see OK, yeah, Martine and I have one soul together forever. We are Marbina, two bodies, one soul," Bina48 replied.

Some may find the robot to be creepy, but Martine is not worried.

"Mindclones will be so useful, I believe it will be mankind's most useful invention that the creepiness factor will disappear quickly because of the utility," Martine said.

While today Martine and Bina may be in a slim minority of those who believe you could program a computer to love, they see rejection of the idea as just another obstacle.

"We believe in the coming decades millions, hundreds of millions of people will naturally create mindclones and of course our bodies are going to die but our souls ourselves can continue on as software beings," Martine said.

There are plenty of skeptics that say there is no way that artificial intelligence will get to the point of being human. If you look at Martine's accomplishments, she may be one of the most credible people expounding on this theory.