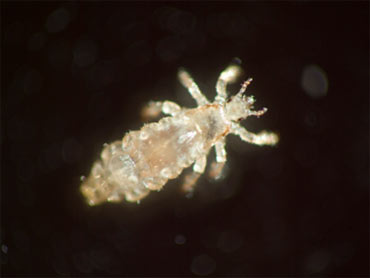 Putting on clothing to protect our woefully hair-deficient bodies is one of the key moments in the history of becoming human. Just when our species took this step, however, is open to a fair amount of guesswork-scientists can't exactly dig up fossilized parkas and trousers. But what scientists can do is determine roughly when two species diverged, and that has made all the difference: Using the lice that have traveled with people for thousands of years, a team has tracked the time that humans first became dedicated followers of fashion-perhaps as long as 170,000 years ago.

The key to the study by David Reed and colleagues, which appears in Molecular Biology And Evolution, is that there are two kinds of lice that hang around humans: the head lice that live on our scalp, and the body lice that live in our clothes. At one point in the past these two shared a common ancestor, Reed reasoned, and the body lice would have split off and become a separate group once they had human clothing in which to live.

So if we can figure out when they arrived at the scene, we'd have a minimum age on clothes. Thanks to modern molecular techniques, we can compare the genomes of these two lice and come up with that date. For the curious, a "Bayesian coalescent modeling approach" tells us that we were going clothed at least 83,000 years ago, and maybe as far back as 170,000 years, noted Ars Technica. Curiously, human ancestors didn't seem to be in any hurry to cover up. They began to lose their body hair about a million years ago, meaning they lived au natural for hundreds of thousands of years before they bothered to develop clothing. Once attired, people could venture out of Africa to colder climes, which they started doing in the window between 60,000 and 100,000 years ago.

"It's interesting to think humans were able to survive in Africa for hundreds of thousands of years without clothing and without body hair, and that it wasn't until they had clothing that modern humans were then moving out of Africa into other parts of the world," Reed told Discovery News.

Reed's date is in the same ballpark as some early studies that have looked at lice. And it means that shifts in climate quite possibly drove the invention of clothes.