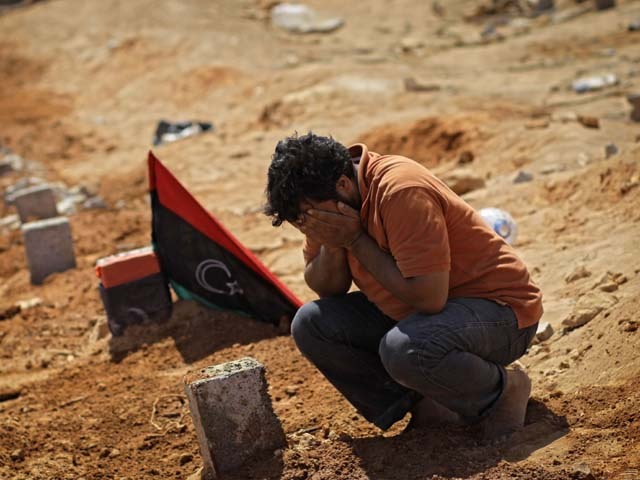 Rebel forces have been pushing to seize the front-line town on Libya's coast for close to a week, but they say fields of land mines laid by Muammar Qaddafi's forces have slowed the advance.

Rebels have been struggling to oust Qaddafi since the uprising against his rule broke out in February.

Last week, more than 30 nations including the United States gave them a boost by recognizing their National Transitional Council as the country's legitimate government.

Rebels now control much of Libya's east, the western port city of Misrata and most of the western Nafusa mountain range south of the capital, Tripoli.

View of campaign vs. Qaddafi from high in sky
NATO hits radar at Tripoli's civilian airport
Qaddafi gov't says it met with US to repair ties

Still, rebel forces -- mostly volunteers with looted weapons -- have made slow progress on the battlefield, despite NATO's bombing of Qaddafi's troops to enforce a U.N. resolution protecting civilians.

The International Committee of the Red Cross says medical services in the western mountains are struggling with a flood of casualties from fighting.

An ICRC delegation visited the region and provided bandages and other medical materials.

Arab and Berber rebels wrested control of much of the Nafusa mountains from the government weeks ago. The range stretches from the Tunisian border to within 60 miles of Tripoli.

But rebels have been unable to capture the strategic mountain town of Gharyan, which controls the approach to the capital.