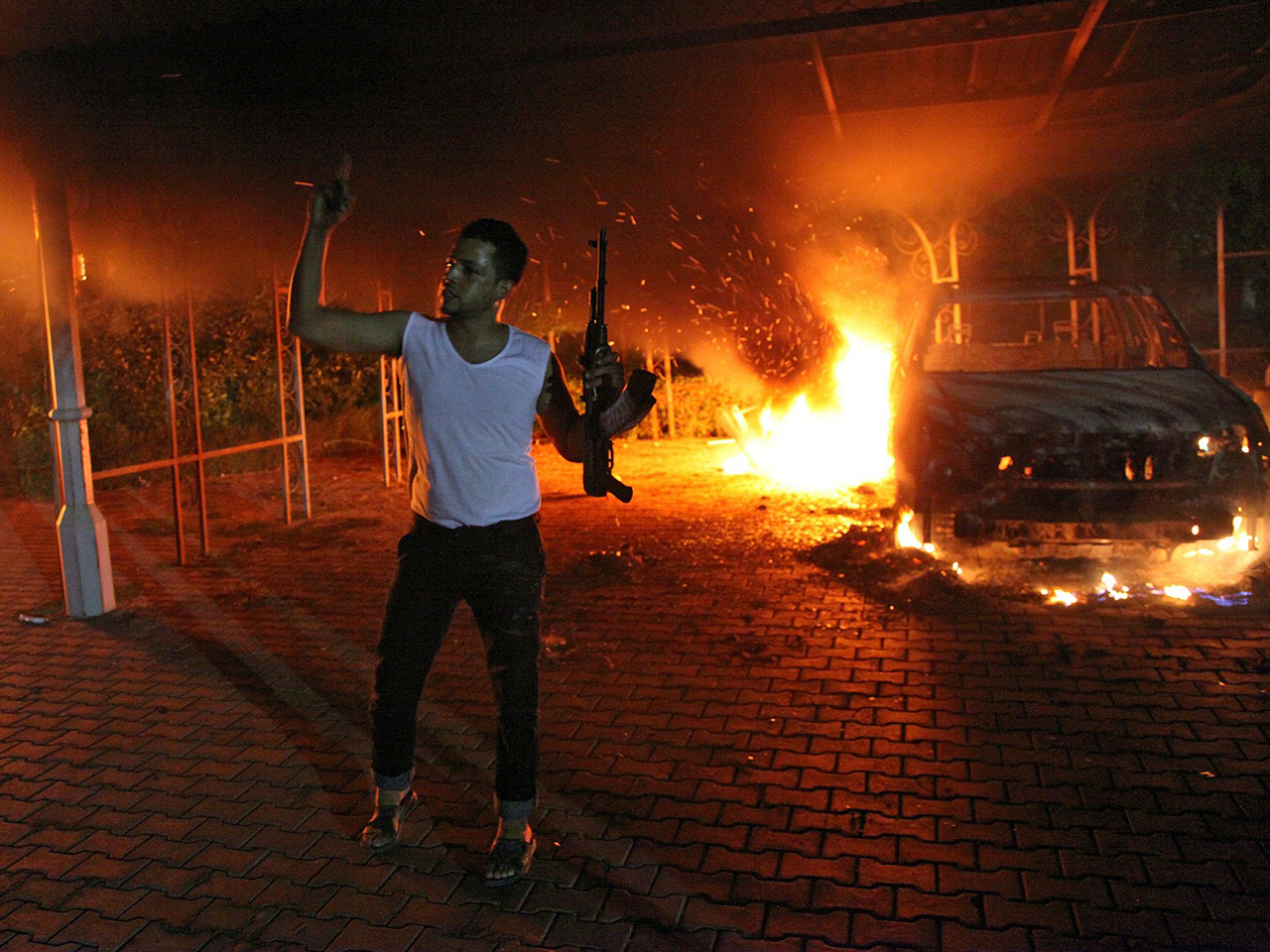 (CBS/AP) BENGHAZI, Libya - The attack that killed four Americans in Libya, including the U.S. ambassador, was an organized two-part operation by heavily armed militants that included a precisely timed raid on a supposedly secret safe house just as Libyan and U.S. security forces were arriving to rescue evacuated consulate staff, a senior Libyan security official said on Thursday.

Libyan authorities have made four arrests in the investigation into the attack on the U.S. consulate in Benghazi in which the U.S. ambassador and three embassy staff were killed, the deputy interior minister said on Thursday.

"Four men are in custody and we are interrogating them because they are suspected of helping instigate the events at the U.S. consulate," Wanis el-Sharef, eastern Libya's deputy interior minister, told Reuters.

He said others were being closely monitored by police to see whether they are linked to a group. He refused to elaborate.

The FBI is also in Libya investigating the attack. A government official speaking on the condition of anonymity told CBS News the FBI is planning to send investigators to Germany to interview Libyan U.S. Consulate personnel who were evacuated there.

El-Sharef said the attacks Tuesday night were suspected to have been timed to mark the 9/11 anniversary and that the militants used civilians protesting an anti-Islam film as cover for their action. Infiltrators within the security forces may have tipped off militants to the safe house location, he said.

Ambassador Chris Stevens and another American were killed in the consulate during the initial violence, as plainclothes Libyan security were evacuating the consulate's staff to the safe house about a mile away, el-Sharef said. The second assault took place several hours later and targeted the safe house - a villa inside the grounds of the city's equestrian club - killing two Americans and wounding a number of Libyans and Americans.

A Libyan security guard who tried to defend the compound but was wounded in the attack told CBS News correspondent Charlie D'Agata it had the marks of a planned attack.

"It was a set up," he said. "They were armed with automatic weapons. Some had their faces covered and wore flak jackets. It felt like there were hundreds of hundreds of them."

El-Sharef, who was running the Interior Ministry's operations room commanding security forces in the city, gave The Associated Press an account of the night's chaotic events.

The crowd built at the consulate - a one-story villa surrounded by a large garden in an upscale Benghazi neighborhood - in several stages, he said. First, a small group of gunmen arrived, then a crowd of civilians angry over the film. Later, heavily armed men with armored vehicles, some with rocket-propelled grenades, joined, swelling the numbers to more than 200.

The gunmen fired into the air outside the consulate. Libyan security guarding the site pulled out because they were too few. "We thought there was no way for the protesters to storm the compound, which had fortified walls," he said. El-Sharef said Libyan security advised the Americans to evacuate at that point, but he says the advice was ignored. There was shooting in the air from inside the consulate compound, he said.

At this point, he said, the crowd stormed the compound. The consulate was looted and burned, while plainclothes security men were sent to evacuate the personnel.

Stevens, he said, is likely to have died of asphyxiation following a grenade explosion that started a fire, el-Sharef said. Ziad Abu Zeid, a Libyan doctor to whom Stevens' body was taken, told The Associated Press on Wednesday that the 52-year-old Stevens died of asphyxiation.

U.S. officials have said attackers broke into the main consulate building at around 10:15 p.m. and set the compound on fire. Amid the evacuation, Stevens became separated from others, and staffers and security that tried to find him were forced to flee by flames, smoke and gunfire. After an hour, according to U.S. officials, U.S. and Libyan officials drove the attackers from the consulate.

The next attack came hours later. Around 30 American staffers along with Libyans had been evacuated to the safe house while a plane arrived from Tripoli with a joint U.S.-Libyan security group that was to fly them back to the capital, el-Sharef said.

El-Sharef said the original plan was for a separate Libyan security unit to escort the evacuees to the airport. Instead, the joint unit went from the airport to the safe house, possibly because they were under the impression they were dealing with a hostage situation, he said. The militant attack coincided with the joint team's arrival at the safe house, he said.

That the attackers knew the safe house's location suggests a "spy" inside the security forces tipped off the militants, he said.

One of five private security guards at the consulate said the surprise attack began around 9:30 p.m. when several grenades that were lobbed over the outer wall exploded in the compound and bullets rained down.

The guard was wounded in the left leg from shrapnel. He said he was lying on the ground, bleeding and in excruciating pain when a bearded gunman came down the wall and shot him twice in the right leg, screaming: "You infidel, you are defending infidels!"

"Later, someone asked me who I was. I said I was the gardener and then I passed out. I woke up in hospital," said the guard, who spoke to The Associated Press from his bed at a Benghazi hospital. He spoke on condition of anonymity because he feared reprisals and reprimands from his employers.

U.S. officials have not confirmed the account. They have spoken of an attack on the consulate's annex that killed two Americans, but said their report on the incident was still preliminary.

(Below, watch a report for CBS Evening News by correspondent David Martin on the terrorist manhunt underway by U.S. security personnel in Libya.)