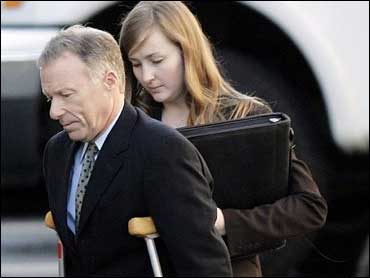 Before his indictment and subsequent conviction in the CIA leak investigation, Irve Lewis "Scooter" Libby wore many hats – most of them with the name Vice President Dick Cheney attached.

Often called "Dick Cheney's Dick Cheney," Libby himself is not easy to categorize. He has been both an influential foreign policy adviser and the author of a highly-acclaimed thriller set in turn-of-the-century Japan.

Libby, 56, was a constant presence behind the scenes in the Bush administration. Most notably, he played a central role in helping to compile the White House's allegations that Iraq possessed weapons of mass destruction.

Libby, who earned his moniker "Scooter" as a hyperactive toddler, followed in the footsteps of other prominent officials in the Bush administration – most notably Paul Wolfowitz, the former deputy secretary of defense and current head of the World Bank. Along with Donald Rumsfeld, Condoleezza Rice, and Wolfowitz, Libby became part of a network of neo-conservatives who many know as the "Vulcans" – Mr. Bush's core national security team.

While attending Yale, Libby took a political science class taught by Wolfowitz, who ultimately persuaded him to join the Regan administration. In 1981, Libby began his government career, working in the State Department as a member of the Policy Planning Staff in the Office of the Secretary. From 1982 until 1985, he served as director of special projects in the Bureau of East Asian and Pacific Affairs. It was perhaps this post that inspired him to write "The Apprentice," his 1996 thriller that takes place in 1903 Japan.

When asked by Larry King in 2002 if he was a novelist working part-time for the vice president, Libby said: "I'm a great fan of the vice president. I think he's one of the smartest, most honorable people I've ever met. So, I'd like to consider myself fully on his team, but there's always a novel kicking around in the back somewhere."

In 1997, Libby helped found the Project for the New American Century, a Washington-based Republican think tank with the goal of promoting "American global leadership." With William Kristol, Robert Kagan and others, Libby wrote its 2000 report entitled, "Rebuilding America's Defenses: Strategy, Forces, and Resources for a New Century."

It was not the first time Libby had written about defending America. He co-authored the draft of the "Defense Planning Guidance" with Wolfowitz for then-Defense Secretary Cheney in 1992.

Prior to joining the current Bush administration in 2001, Libby served as the managing partner of the Washington, D.C. office of Dechert, Price & Rhoads, an international law firm. Over the course of his career, he has also worked for the American Bar Association and the Defense Department.