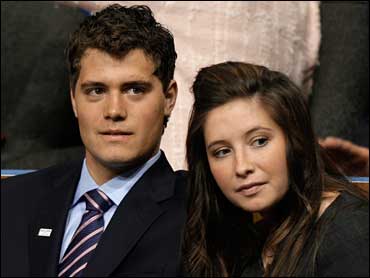 NEW YORK (CBS) Levi Johnston is apologizing to the Palin family for things he said in the wake of his breakup from former vice presidential candidate Sarah Palin's daughter, Bristol.

In a statement to People magazine, Johnston said, "Last year, after Bristol and I broke up, I was unhappy and a little angry. Unfortunately, against my better judgment, I publicly said things about the Palins that were not completely true. I have already privately apologized to Todd and Sarah. Since my statements were public, I owe it to the Palins to publicly apologize."

"So to the Palin family in general and to Sarah Palin in particular, please accept my regrets and forgive my youthful indiscretion," his statement continued. "I hope one day to restore your trust."

Bristol also released a statement, saying, "Part of co-parenting is creating healthy and honest relationships between the parents. Tripp one day needs to know the truth and needs to know that even if a mistake is made the honorable thing to do is to own up to it."

After the couple broke off their engagement in March 2009, Johnston spoke to various media outlets claiming, among other things, that there was "a lot of talk of divorce" in the Palin household and that Sarah Palin complained about her job as the governor of Alaska.

After claiming in the June issue of Harper's Bazaar that Johnston was "just a stranger" to her, Bristol has now said that the two want to turn "a new page here as co-parents ... and [put] aside the past because doing so is in [our son] Tripp's best interest," according to People's report.