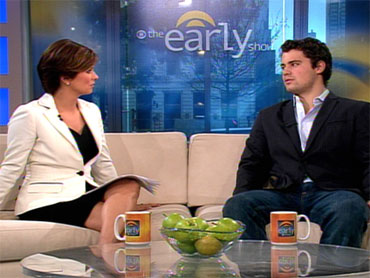 In Part One of a two-part exclusive interview with "Early Show" co-anchor Maggie Rodriguez, which aired Wednesday, the father of Palin's grandson says, "There are some things that I have that are huge. And I haven't said them because I'm not gonna hurt her that way.

Johnston says he's referring to things Palin did while she was governor of Alaska. Asked whether those actions were illegal or immoral, he refused to elaborate.

Johnston also told Rodriguez he's been hearing a lot about his saying in a recent first-person tell-all in Vanity Fair magazine that Palin routinely referred to her baby, Trig, who suffers from Down syndrome, as "retarded."

"I was just in shock for the first time I heard it," Johnston recalled for Rodriguez. "And then she'd say it regularly. And I think she was joking, but it doesn't make it right."

Still, Johnston remarked to Rodriguez, "Those are just little ... things I put in Vanity Fair. You know, all the big things I got, I'm keeping -- you know, I'm keeping them in, and -- you know, it's just something that probably will never come out."

He added that he's "sure Sarah's got something ... coming for me," perhaps in her soon-to-be-released memoir, but, "I'm not worried about her saying anything about me. I've really never done anything bad. I don't have anything to hide. So she can go on and say what she wants."

Johnston stood by his contention in Vanity Fair that Sarah and Todd Palin would not only regularly talk about divorce -- they'd do it in front of their children, adding to Rodriguez, "I'm sure it really hurt their kids, you know. I didn't like it. I wasn't even their kid."

Spokespeople for the Palins deny the divorce assertion.

Johnston told Rodriguez Palin's daughter, Bristol Palin, the mother of his son, Tripp, did most of the mothering of Trig, because Sarah and Todd weren't around much.

Now an aspiring actor and model, Johnston is going for the ultimate exposure -- in an upcoming issue of Playgirl magazine.

He told Rodriguez the Playgirl spread will be done "tastefully," saying, "I'm not gonna just go out there and get naked." He expands on that in Part Two of the interview, which airs Thursday.

The interview with Rodriguez is the latest in a he-said-she-said battle with the Palin family.

Johnston burst onto the public stage at the Republican National Convention in August, the handsome boyfriend of vice-presidential candidate Sarah Palin's pregnant daughter. After the Republicans lost the election, Johnston and Bristol broke up. She had his baby in December. But he says the Palins shut him out of their lives.

And that's when the battle began, each side accusing the other of lying.