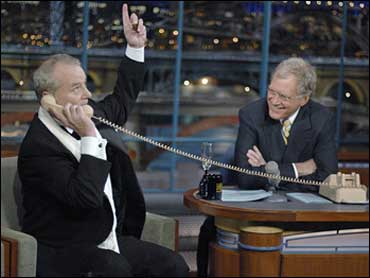 It was a big milestone, but the celebration was low key Thursday as David Letterman marked 25 years as a late night talk show host.

Shaffer may have had one of the most memorable lines, intoning in a top ten list of "Late Show" staffers marking the anniversary that he had "wasted" his life in his long association onstage with Letterman.

Murray meanwhile made a grand entrance, stepping in time to the strains of "Let's Get Physical," carrying anniversary champagne for Letterman while dressed in top hat and tails not unlike the elders of Punxsutawney, Pa., who preside over each year's Groundhog Day ceremonies.

Looking around, he recalled his first appearance with Letterman, many years ago, and complained about the lack of festive atmosphere, taking off his top hat in protest at the absence of pomp.

Murray's trip to the Ed Sullivan theater where the "Late Show" unfolds each night was not without reward. At Murray's request, Letterman called CBS president and CEO Les Moonves to try to finagle a Super Bowl XLI invitation for Murray, who briefly posed as Letterman's brother when Letterman put Murray on the phone with Moonves.

The CBS honcho, not fooled, was quick to inform the imposter that Letterman does not have a brother. Busted, Murray was forced to reveal his identity, and apparently succeeded in his Super Bowl quest.

Murray was Letterman's very first guest back in 1982 when "Late Night" made its debut on NBC, running there for eleven and a half years before making the switch to CBS.

When Letterman moved to CBS on Aug. 30, 1993, Murray was the guest for the inaugural "Late Show" broadcast.

Letterman's work on late night has earned him 14 Emmy awards and 89 Emmy nominations. Over the years he's had 4,506 broadcasts featuring 14,772 guest appearances on both his shows.

Here are some highlights from Letterman's 25-year career on late night television: