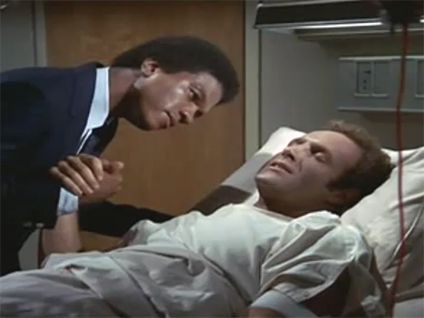 Here's a SOB STORY for you. The sort of Hollywood movie that's supposed to bring tears to our eyes is disappearing BEFORE our eyes. And not everyone is happy about it. Our Cover Story comes from Mo Rocca:

Remember movies that made you cry? Stories about mothers and daughters ("Terms of Endearment"), sons and their fathers ("The Champ"), undying friendship ("Beaches") and heartbreak ("Old Yeller").

The kind of movies "Sleepless in Seattle" paid homage to.

Remember tearjerkers? Are we seeing fewer of these movies now?

"Oh my God, yes!" said Lynda Obst, who produced "Sleepless in Seattle," She said tearjerkers are primarily aimed at women, and these days Hollywood isn't much interested in women.

"Women have for the past maybe 15 years been treated like a niche audience," Obst told Rocca.

"I read that actually 52 percent of the movie tickets sold are sold to women?" Rocca asked.

"Yes, but nobody seems to notice any more."

So who is Hollywood making movies for?

Young men are interested in big, loud, special effects movies, often based on comic books. And they line up to see them on that make-or-break opening weekend.

"They go the most often, and they go in droves," Obst said. "And most significantly, their taste mirrors the international market because they require the least dialogue and the most explosions! And our foreign market is the biggest portion of our business right now."

While tearjerkers can play well overseas, they don't haul the same treasure of a "Pirates of the Caribbean," with its sequels and spinoff merchandising. You can't do "Terms of Endearment" action figures.

Film historian and "Entertainment Tonight" film critic Leonard Maltin (who likes to have a good cry now and then) says good tearjerkers are still being made in Hollywood - just not with real people.

"Do you think it's kind of funny that that's an animated movie?" Rocca asked.

"Not at all," Maltin said. "'Dumbo' makes me cry unabashedly and at the same exact point every time I watch it.

"Where the imprisoned mother is cradling her little Dumbo through the cage, and her trunk is singing the lullaby - that's it. I'm done!" he laughed.

Pixar made "Up." They also made this year's best picture nominee, "Toy Story 3," another animated film that had audiences in tears.

"It's possible that the abstraction of having these things animated allows us to accept them more readily than we would with live actors, where we might be more judgmental," Maltin said.

James Caan - best known for playing tough guys, like Sonny Corleone in "The Godfather" - starred in one of the all-time highest scoring tearjerkers. It wasn't animated, and you wouldn't call it a chick flick.

"The toughest guys, they confess like they did something wrong, guys who act tough: 'I actually cried in that movie," Caan said. "Yeah, well, I knew it was comin' and I cried, too!"

It was the real life-and-death story of football player Brian Piccolo and his friendship with Gale Sayers, played by Billy Dee Williams.

"Yeah, I mean, the first two guys, black and white guys, integrated guys, that roomed together," he said. "It's really not a tearjerker. It's a real story, 'cause you get so involved you want them to succeed, and you cry if they don't."

It wasn't so much the tears but the blood and sweat that drew Caan to the role:

"Yeah, until a couple of those guys hit me for real a few times. I go, 'Listen, I'm an actor. Leave me alone!' you know?"

What made "Brian's Song" a tearjerker, Caan says, wasn't how Brian Piccolo died but how he lived.

"He wasn't fast. He wasn't big. He just had heart, you know? Was like a big heart on two sticks. And that's who that guy was."

"I just looked at this beautiful girl, my wife, and just said the words to try to make her smile," Caan recalled. "I said to myself, 'I'm gonna try just not to make her cry,' and I got caught up in it, and a tear came out for real.

"Weepies are not about depression; they're about resolution and transcendence," said Obst.

Case in point: "Terms of Endearment," the mother (and daughter) of all tearjerkers. There was death. But it wasn't "about" death.

"It was about a reconciliation of the relationship that was so full of strife," Obst said. "So much to relate to. And she had love again."

"Do you think 'Terms of Endearment' would be made today?" Rocca asked.

"It had Jack Nicholson, right? So, maybe it could get made. Maybe."

"There used to be an expression about movies: 'Oh, go to this movie and you'll have a good cry,'" said Maltin. "Meaning, that you won't leave the movie dejected or depressed. You'll leave the movie feeling almost sort of refreshed in an odd way because you've had an emotional experience."

And if that experience disappears, well, that would be a crying shame.