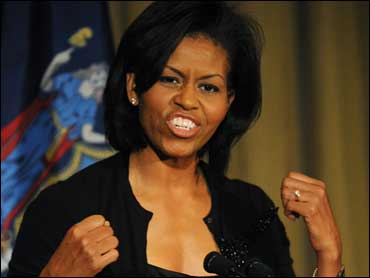 This column was written by Katherine Marsh.

In June, US Weekly magazine delivered a bombshell--excuse me, an "EXCLUSIVE" bombshell, as the magazine trumpeted it--about Michelle Obama: "Michelle Is an 'An Extraordinary Mother.'" The source of this shocking claim was none other than Senator Barack Obama. Also revealed was Michelle's "struggle to get pregnant," and how she took her best friend to see the Sex and the City movie. The story that directly follows hers on US's website was "Woman Sues Victoria's Secret for Alleged Thong Injury."

As Michelle Obama takes the stage tonight as the headline speaker on the Democrats' "Unity"-themed kick-off in Denver, I'm hoping they finally let the poor woman get back her dignity. By now we all know the story: In February, Michelle declared that "for the first time in her adult life" she was proud of America. Conservatives got all Toby Keith on her (though it's worth noting that the hyper-patriotic country star has emerged as an Obama fan) and ugly, racist rumors began to fly. Michelle's Princeton thesis advocated black separatism; she had brandished the unspeakable racial slur "whitey"; she had grown an Afro, carried a Kalashnikov, and gave her husband a terrorist fist jab (oh, wait--that was The New Yorker cover). Once considered an impressive surrogate for her husband, Michelle was essentially booted from center stage and forced to make amends for her grievous error by subjecting herself to various forms of cruel and unusual rebranding--among them, a guest co-host stint on "The View."

I miss the old Michelle, and I think a lot of other women do, too. Not the scripted Stepford wife fist-bumping Elisabeth Hasselbeck, but the sassy better half who reminded us that while Barack was the answer, he was also stinky in the morning and forgot to put the butter away. She both affirmed his promise and humanized him. You could actually imagine their relationship was a real thing--not a symbiotic power alliance, but a union of two different people with different goals who just happen, when they're not bickering about the butter, to find each other pretty cool. This Michelle was an asset to the campaign, a highly accomplished woman outside the sphere of motherhood as well as in it, a necessary bit of fire to Obama's dispassionate ice, and valuable proof that Obama isn't the type of guy inclined to surround himself--like our current president--with yes-men or -women. If Joe Biden can be forgiven his sins and welcomed onto the stage beside the African American nominee he once called clean and articulate, then surely Michelle Obama can finally be freed from the clutches of US Weekly and Joy Behar and allowed to give a speech that truly reflects who she is.

Still, I'm skeptical that this will happen. Even before the "proud" flap, the real Michelle stirred up critics, most famously Maureen Dowd, who noted that some found her ribbing of Obama "emasculating" and worried that it "rests on the presumption that we see him as a god." As my colleague (and fellow working mom) Michelle Cottle explained in a smart New Republic piece about Michelle Obama back in March, Michelle's cracks about her husband are a familiar genre: Spend time among married women, especially those balancing work and kids, and you inevitably hear a lot of "my guy's great but he always leaves the toilet seat up, puts the baby's clothes on backwards" kind of remarks. "Emasculating" may be one word for these types of exchanges, but "sisterly" is another--an acknowledgement of the greater burdens that women carry when it comes to the domestic front. With the Democrats now running a two-man ticket (not to mention Biden's inaugural wince-worthy joke that his wife's doctorate degree "is a problem") and with angry Hillary voters to placate, letting Michelle show solidarity with other women and their real-life frustrations would be a wise idea.

It's true that Michelle, in tonight's speech and as a first lady, will undoubtedly disappoint some feminists. She has made it clear from the beginning that she is not, à la the Clintons, selling herself as a co-president with Barack. She does not appear to have political aspirations and her staff is unlikely to engage in formulating policy. She seems to place a high value on the role of mother. But there is also no way she could ever fit the more traditional first lady mold. She is not a deferential sidekick like Cindy McCain (who fueled the "proud" controversy by saying that she has always been proud of her country) or Laura Bush (though Laura did show a rare public independence of spirit in her defense of Michelle). She has a first-rate education and a professional career of her own. Like her husband, she seems obsessed with trying to articulate the complexity of things as they are--revealing strains in her relationship with Barack, for example--as a way to unify her own experience with others. No wonder her attempts to play a more traditional and guarded first lady have fallen flat.

The real problem for Michelle is that there is no existing First Lady paradigm that fits her. But the good news is that these days more women are like Michelle Obama--a label-defying mix of mother and worker, partner and wife--than they are like Hillary Clinton or Laura Bush. Michelle's challenge--and the moral and political responsibility of her handlers in the Obama campaign--is to allow her to convey this with wit and frustration, candor and strength.

Tonight's speech-her biggest moment in the spotlight thus far--will likely reveal which Michelle we'll end up with as First Lady. Will she be the more complicated and outspoken woman who shares an honest portrait of her life? Or will we end up with the Michelle featured in a first lady photo shoot in the September issue of Harper's Bazaar? Okay, so it's really Tyra Banks, the "America's Top Model" diva who famously chastises aspiring models to show a broad range of emotions, portraying Michelle's possible life in the White House. In frame after frame, Tyra gives Michelle--wearing a black cocktail dress in the Oval office, reading in bed with a male-model Barack in matching Harvard sweatshirts--the same blank grin.

Katherine Marsh is managing editor of The New Republic.

By Katherine Marsh
If you like this article, go to www.tnr.com, which breaks down today's top stories and offers nearly 100 years of news, opinion and analysis