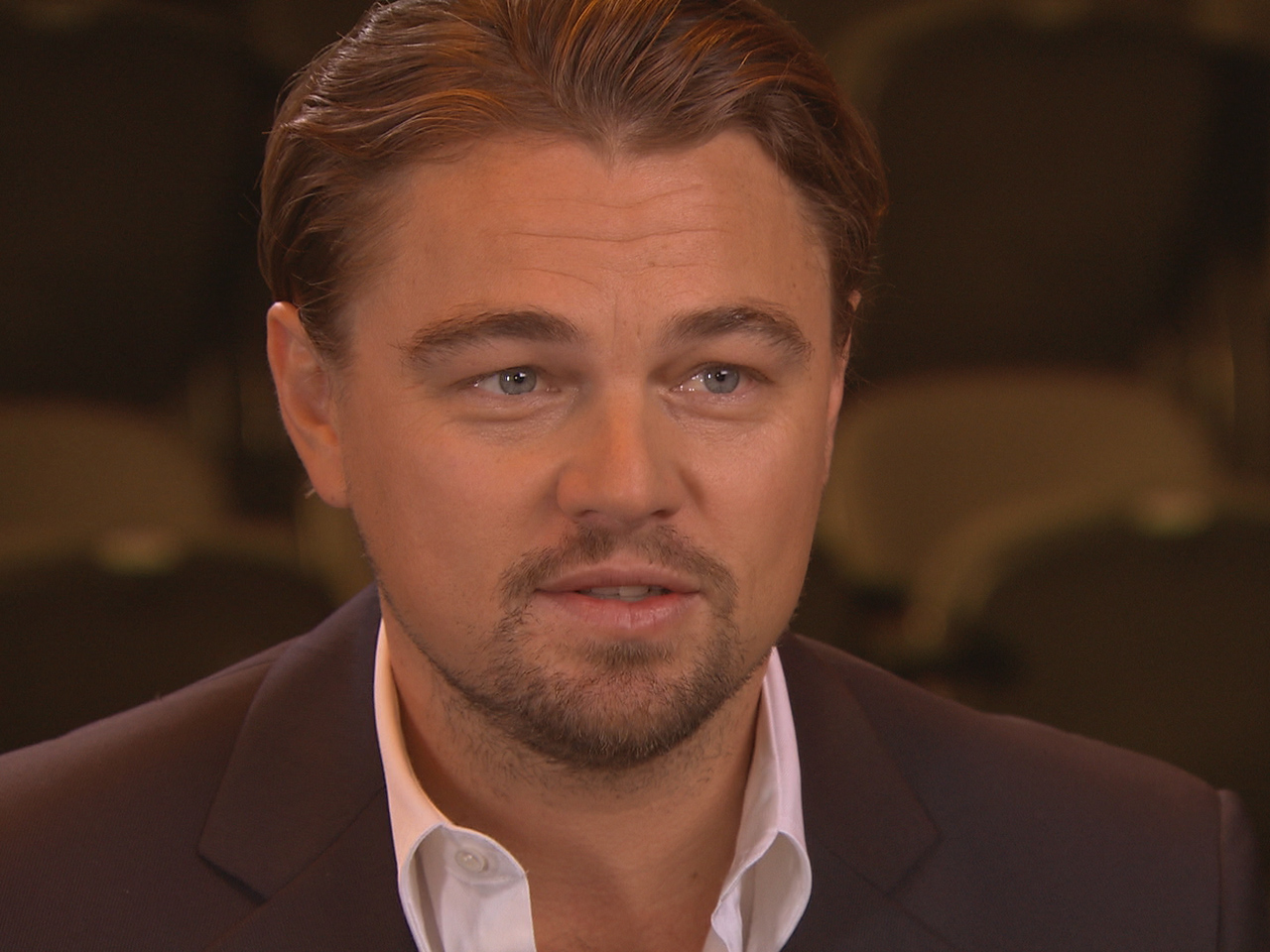 This year, when they ask for "The envelope, please ..." at the Oscars, many expect to hear his name announced as Best Actor for his latest film. Lee Cowan tells us how Leonardo DiCaprio fought to get it made:

It ended up, said Leonardo DiCaprio, being the movie he wanted to make.

Which is rare, right?  "Very, very rare," he told Cowan. "I waited until I got the right financing, [and] the right people that would allow us to make the movie we wanted to make."

The movie DiCaprio was so desperate to make was "The Wolf of Wall Street." It's a vibrant and polarizing look at the greed and excess of the bull market of the 1990s -- especially one charismatic, almost cult-like broker named Jordan Belfort.

"You said that it wasn't really until you started doing those speeches that you sort of got the sense of that rock-star quality that he had?' asked Cowan.

"Yeah, they're almost like out of 'Gladiator' or 'Braveheart,'" said DiCaprio. "They're like a war cry to your troops, except they're completely twisted, and encouraging his soldiers to go out there and screw over as many people as possible."

"There is no nobility in poverty. I've been a rich man, and I've been a poor man, and I choose rich every time. At least as a rich man, when I have to face my problems, I show up in the back of a limo wearing a $2,000 suit and a $40,000 gold watch!  … So you listen to me and listen carefully. Are you behind on your credit card bills? Good. Pick up the phone and start dialing. Is your landlord threatening to evict you? Good. Pick up the phone and start dialing. Does your girlfriend think you're a ****ing loser? Pick up the phone and start ****ing dialing! I want you to deal with your problems by becoming rich! I want you to go out and spend money! Leverage yourself, back yourself into a corner, let the consequences of failure become so ****ing unthinkable that you'll have no choice but to do whatever it takes to win!"

DiCaprio was intrigued by Belfort's autobiography, an unvarnished tale of drug abuse, and abuse of his clients, cheating investors out of millions, before going to prison for securities fraud and money laundering.

DiCaprio spent "many months" with Belfort himself. "Certainly he helped me with the Quaalude sequences, because I had no idea what that stuff was like! He re-enacted a lot of that for me. He crawled around on the floor and showed me what it was like."

"You know, he's a likable guy," DiCaprio said. "His action were deplorable, and he'll admit that. But when somebody's such an open book and is so candid about what they did, and unflinching, you have to appreciate that as an actor, because there's not many people that really do that."

DiCaprio shopped the movie around for seven years, with no takers. Even director Martin Scorsese was reluctant at first.

"Leo was the one who stayed on the project," Scorsese said. "He would just keep coming around telling me more about the project."

"He was pretty persistent?"

"Yes. I said, 'Alright, I'll look at it again, but please don't even let me read it if there's no possibility of doing the picture the way it should be made.'"

"Why so obsessed?" asked Cowan.

"Because the world that we live in seems to be very surreal sometimes," DiCaprio said. "The incessant need for more is a part of our culture, and I see it all around me. And you know, doing this movie we wanted to put that darker nature of humanity up on screen."

His persistence paid off. His performance has already earned him a Golden Globe, and he's up for an Oscar -- his fourth nomination for acting -- and one of five nominations for the film itself.

Scorsese told Cowan that, for DiCaprio, "Wolf of Wall Street" presented "the role of a lifetime, really. I mean, he's just taken it to another level."

Scorsese should know -- this is their fifth picture together, and almost all of them have dealt with the darker side of human nature, whether it was DiCaprio's portrayal of the reclusive Howard Hughes in "The Aviator," or his part as an undercover Irish cop in "The Departed."

DiCaprio has an apartment in New York, but his fascination with crime and power, he says, actually goes back to growing up in the not-so-nice part of Hollywood.

He said there were times when he'd rather just stay at home than go out because it was just safer to say at home.

"I mean, I had a prostitution ring on my street corner; there were drug addicts in my alleyway," DiCaprio said. "I got sort of robbed at five years old or something like that. Yeah, it was a pretty hardcore neighborhood.

"I think that gave me a lot of motivation to sort of, I think, be successful really, and try to do something else."

"Because you wanted out of that environment?"

But he never went to acting school. "Uh-uh. Well, I went to drama class in junior high and high school, but I never had sort of formal training or anything like that, no."

Cowan asked, "So where did all this come from?"

"I grew up in a kind of an artistic household," he replied. "I was always kind of imitating my dad's friends and I would imitate everyone around us in the neighborhood. And I'd carry that over in school and get into a lot of trouble constantly.

"Once I found out that people actually got paid for this, I was like, all right!"

He started bugging his mom to take him to auditions, while his father helped engender an interest in film.

"I remember my father taking me, I believe it was maybe to 'Midnight Run,' and saying, 'You want to know what a great actor is? You want to watch a great actor, Leonardo?'  I go, 'Yeah, sure.' 'That guy right there."

That actor was Robert De Niro -- as luck would have it, DiCaprio's eventual co-star in his first major film, "This Boy's Life."

"I'd never seen a set that serious before ," DiCaprio said. "Watching De Niro prepare, and you know, the chances that he would take with each scene -- it wasn't just about reading the dialogue, it was about, you know, creating something out of thin air."

DiCaprio made an impression on De Niro, too -- so much so, De Niro actually told Martin Scorsese to keep an eye on the new up-and-comer.

"Normally Bob doesn't call me to talk to me about actors that I should work with," said Scorsese. "This was sort of out of the blue"

If anyone had any doubt he was different, DiCaprio proved it playing an intellectually-disabled boy in "What's Eating Gilbert Grape." His portrayal earned him his first Oscar nod, at just 19 -- and everything changed.

His boyish face made him a teen heartthrob in "Romeo + Juliet."

And then came "Titanic." It made box office history -- and made DiCaprio a worldwide sensation.

"It was surreal. It's still surreal. It's always surreal," DiCaprio said. "I look back at that time and it's hilarious because the movie comes out and all of a sudden, people start seeing it around the world. It's incredibly successful. And people are saying 'This movie is huge.' And I'm like, 'Great. Cool. Isn't that what it's supposed to be?'

"They're like, 'No, no, you don't understand, I mean, it's making billions of dollars.'

"I'm like, 'So that's good, right?" he laughed. "Billions of dollars are good? That means it's a big movie?"

"You just didn't get the scale of it all?' said Cowan.

"I didn't understand, I really didn't."

DiCaprio not only became bankable talent, but the new darling of the paparazzi.

"You had a lot of fun when you were young," said Cowan.

"And criticized for it a lot, too."

"Yeah, I think that comes with the territory, too, though," he said. "And the sort of microscope that was put on me, certainly after 'Titanic' came out, you know, every activity that I did was sort of in the newspaper, which was, you know, silly, and I tried to avoid it, but it was -- it was what it was."

Still, for an actor who could do anything he wanted, he chose his roles sparingly.

He became a student of classic cinema that impressed even Scorsese himself.

"He tells me, 'Did you ever see this film called 'Solaris' by Andrei Tarkovsky?" Scorsese said. "Now here's this kid at 23 or 22 years old talking about Andrei Tarkovsky!"

"Do you think he's a bit of an old soul?" Cowan asked.

"Maybe. Maybe. You know, there's seems to be a lot of experience there, you're right, an old soul. Yeah."

Now at 39, he remains not only one of Hollywood's hottest commodities, but a very eligible bachelor.

He's hardly lacking for someone (usually a model) on his arm. But any talk of marriage prompts a nervous drink of water.

"Do you see that for you?" Cowan asked.

"I think everybody -- not everybody, but I think that, you know, eventually when the time is right, absolutely, yeah."

"But does married life seem a little boring to you? A little sedate?"

And that's about as far as he'll go.

His focus, it seems, has always been career -- and for Leonardo DiCaprio, so far it's all gone just as he hoped.

"People talk about what has changed throughout your career," he said. "'How's your taste changed? What kind of person or actor do you want to become?' I knew at 15 years old, like, this is the kind of actor I want to be. These are the type of movies I want to do, and that's it.

"It's an honor to be a working actor, period. And I'm not going to squander this opportunity."

WEB EXCLUSIVE: Read an extended interview transcript of Lee Cowan's conversation with Leonardo DiCaprio, in which the actor talks about working with Robert De Niro and Martin Scorsese, scuba diving with sharks, and his efforts to save the habitat of endangered tigers.