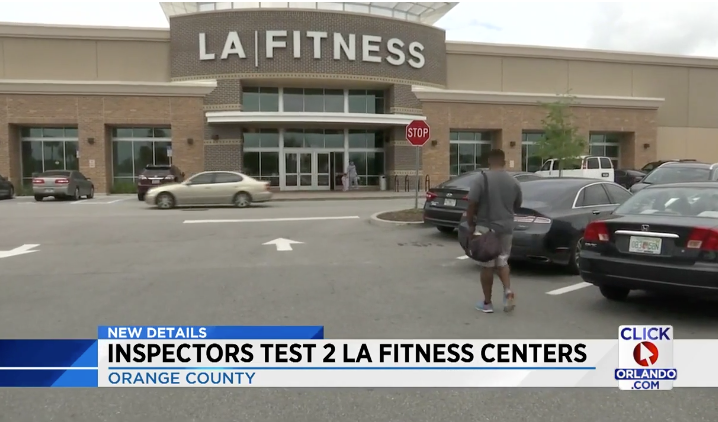 Tony Smith said he has been going to LA Fitness for more than a year, and now he's concerned about getting sick.

"That kind of annoys me. My health is a top priority," he said. "They're always running out of soap, and they don't have proper paper towels so you can wash your hands."

Health inspectors went to the affected locations on Kirkman Road in Orange County and on Orange Blossom Trail in Hunter's Creek on Friday and found conditions were favorable for the bacteria. Officials said the outbreaks occurred at the Kirkman location in late May and the Hunter's Creek location in either late February or late May.

Showers and the spas at both locations were in need of treatment with a hydrochlorinated solution, officials said. The bacterial infection can spread when someone inhales mist from contaminated water.

This week's outbreak marks the third LA Fitness location in the area that was found in recent months to have favorable conditions for the disease. In April, the Florida Department of Health confirmed three cases of the disease from people who were all members of the LA Fitness on Silver Star Road in Ocoee.

One woman said her husband got sick recently. She said she believes it happened after he used the gym.

"He's 37 years old -- very healthy man, never had any type of disease," Malinda Capi said. "For him to spontaneously get pneumonia and work out here every single day ..."

Previously, the disease was found at the LA Fitness on Michigan Street and Conway Road in 2008 and at the Waterford Lakes location in 2010.

Legionnaires' disease is spread by the Legionella bacteria, which, according to Centers for Disease Control and Prevention, can grow and multiply in various parts of a building's water system.

News of the Florida cases comes on the heels of several other outbreaks around the country. The bacteria that causes Legionnaires' was found in a New York City police precinct where an officer was hospitalized with symptoms of the disease. Last week, the Southern Nevada Health District announced it is investigating two cases of Legionnaires' in guests who stayed separately at the Rio All-Suite Hotel and Casino in Las Vegas.

The CDC said the bacteria grows best in warm water and can cause pneumonia-like symptoms, cough, shortness of breath, muscle aches, fever and headaches. Symptoms can show up as many as 10 days after exposure.

The CDC said people with the highest risk are 50 years or older, or people who have a weakened immune system.

"He's always drinking water out of the faucet here," Capi said of her husband. "They didn't build the facilities correctly, or something isn't right."

Now, the Florida Department of Health said all those areas need to be treated, and showers and spas will be closed until further notice.

"I've never seen any signs of any sickness or bacteria that they found," Smith said. "They should at least inform the members."

WKMG reached out to LA Fitness about the bacteria claims, but has not heard back.