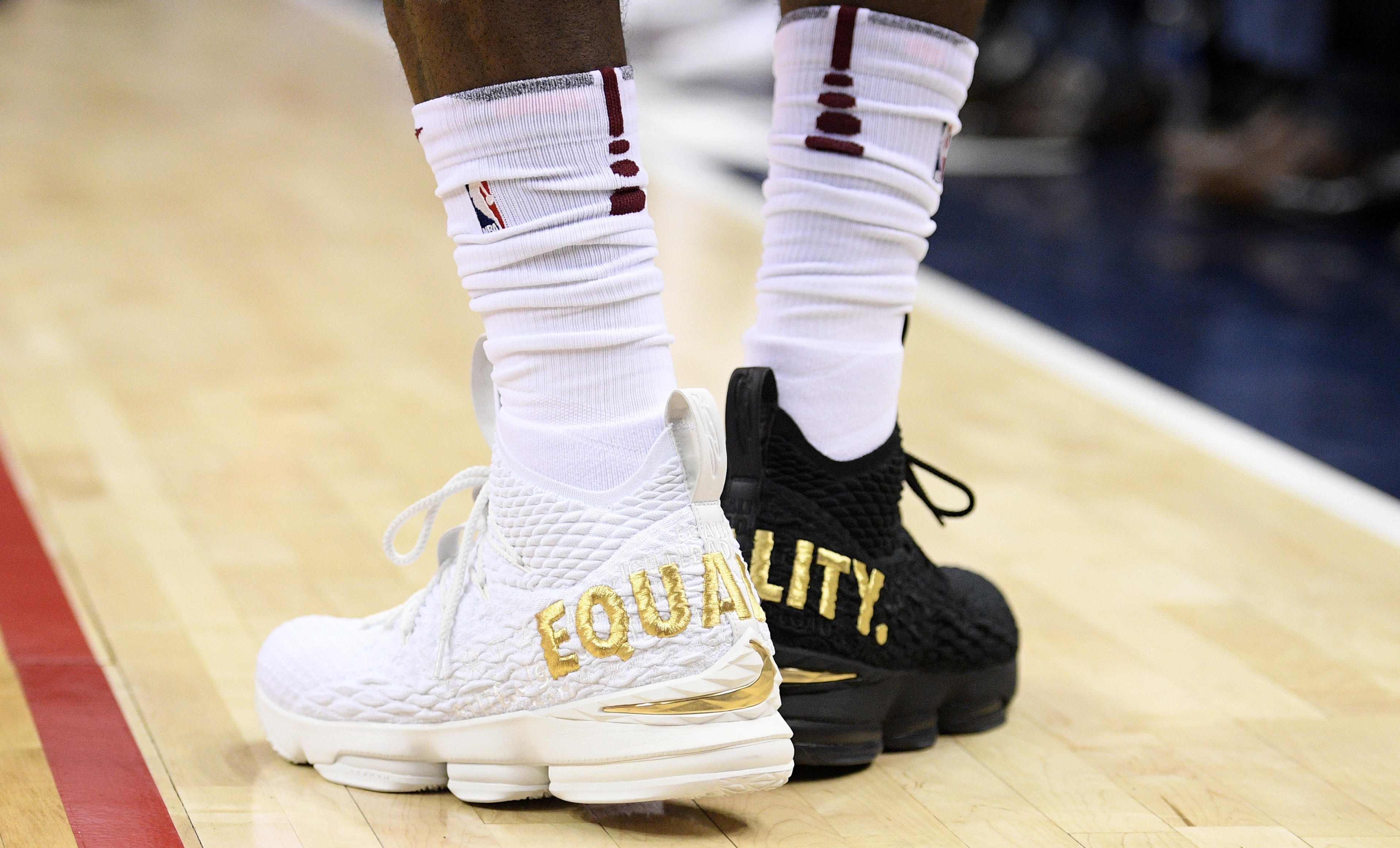 WASHINGTON -- LeBron James joked Sunday that he changed out of his shoes -- one black, one white, with "equality" in gold capital letters -- at halftime because he was playing poorly. "If that's a bad game," teammate Kevin Love said, "then sheesh!"

James finished with 20 points, 15 assists and 12 rebounds to lead the Cleveland Cavaliers past the Washington Wizards 106-99 for their 18th victory in 19 games, and then said afterward his choice of footwear was related to the game being played about a mile from President Trump's White House.

"This is a beautiful country and we're never going to let one person dictate how beautiful and how powerful we are," the four-time NBA MVP said.

In August, James criticized Mr. Trump and defended Golden State Warriors guard Stephen Curry after Mr. Trump said he revoked Curry's invitation to the White House. James called the president a "bum" on Twitter and reminded his followers that Curry didn't want to meet with Mr. Trump in the first place.

On Sunday, James had his fourth triple-double in the past five games despite being called for four fouls in the final quarter. Still, he offered a scathing self-critique.

"I actually played pretty bad tonight. I wasn't as strong with the ball: I had six turnovers. Kind of lazy with the ball, at times," James said. "And my teammates did a great job bailing me out."

"He just affects the game in so many ways and makes a lot of plays for other guys, too," Love said about James. "He's just setting us up and getting us into our spots. That's what he does. He's our leader."

The last time these teams played, at Washington on Nov. 3, Cleveland won thanks to 57 points from James.

That prompted Wizards coach Scott Brooks to joke before tipoff Sunday that holding the four-time league MVP to "56 would be pretty good tonight." He also cracked, "I have a lot of respect for Coach (Tyronn) Lue, but I think he's making a bad decision if he doesn't sit LeBron tonight. Back-to-back games, right? Our fans saw 57. They don't need to see any more."

This time, James was more of a facilitator. "His IQ is the highest I've ever been around," Brooks said afterward. "Just the way he sees the floor."

Bradley Beal led Washington with 27 points, and John Wall had 15 points, 10 rebounds and six assists in 32 minutes in his third game back after missing nine with an injured left knee.

In a matchup of Eastern Conference division leaders, neither team led by more than seven until Wall turned the ball over, leading to a fast break for James, who was fouled at the other end and completed the three-point play for a 103-94 lead.

That was part of a 23-16 edge for the Cavs in the fourth quarter, which began with the teams tied at 83.

"Against a great team like that, you have to be sharp the whole game," Wizards forward Mike Scott said. "In the fourth, we weren't sharp on the offensive end, and they made plays."

Cavaliers guard Dwyane Wade was rested on the second half of a back-to-back. The Cavs finished with 24 assists, ending their streak of three consecutive games with at least 30. Cleveland made 14 3-pointers, its 20th game in a row with at least 10. The Cavs scored at least 100 points for the 24th straight game.

Meanwhile, Wizards forward Otto Porter Jr. sat out with an injured right hip. ... His replacement in the starting lineup, Kelly Oubre Jr., had 11 points and eight rebounds. Forward Markieff Morris missed the start of the second half because he was getting an X-ray on his neck. "Everything came back clean," Brooks said.

If it seems as if James climbs up some career list each and every night, well, that's because he pretty much does. This time, he overtook Hakeem Olajuwon for ninth-most made field goals in NBA history and tied Nick Van Exel for 24th-most 3-pointers. ... Wall's 3 shortly before halftime moved him up to No. 5 on Washington's franchise scoring list. He began the night at No. 7, but surpassed Phil Chenier and Gus Johnson in the second quarter.