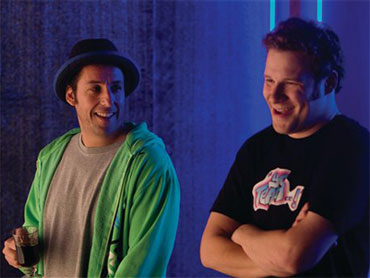 The officer, who spoke on condition of anonymity, said the detainees are comprised of seven Lebanese and two Palestinians.

It was not yet known whether they were linked to the al Qaeda terror group that carried out the Sept. 11 attacks on the United States, he added.

His comments came hours after the Lebanese military issued a statement saying it had arrested members of a terrorist network that planned to attack the embassy of a "major Western state" — the term that Lebanese media often use to refer to the United States.

A spokeswoman at the U.S. Embassy in Beirut told The Associated Press the embassy had "no comment" on the statement, which came from the army's Intelligence Directorate.

The statement said the network was exposed and its members detained with the help of the Syrian forces in Lebanon. Syria has nearly 25,000 troops stationed in Lebanon.

The statement did not give the number and identities of the detainees, but it said they had been interrogated and handed over to the "appropriate judicial authorities."

The network planned to attack security and military centers in Lebanon and to kidnap government officials to bargain for the release of their detained comrades, the statement said.

The security officer said the detainees were believed to be seeking the release of Muslim fundamentalists from north Lebanon who arrested after shootouts with the Lebanese army more than two years ago.

Thursday's announcement comes four days after a major terrorist attack on Western housing compounds in Riyadh, Saudi Arabia, in which 34 people were killed.

Monday night's bombings targeted three residential compounds where expatriate executives and professionals live. Besides the eight Americans, those killed Monday were seven Saudis, three Filipinos, two Jordanians, and one each from Australia, Britain, Ireland, Lebanon and Switzerland, according to the Interior Ministry. Nearly 200 were injured.

Intelligence officials had feared an attack was coming, and U.S. Ambassador Robert Jordan told CBS News Wednesday he had tried and failed before Monday to get the Saudis to tighten security around Riyadh compounds where Americans live.

The arrests in Lebanon also come a day after Iranian President Mohammad Khatami ended a three-day official visit to Lebanon, in which he joined the Lebanese government in condemning the Riyadh attack. However, Khatami expressed support for Hezbollah, the Lebanese militant group that the United States regards as terrorist.

Lebanon, Syria and Iran say they are opposed to terrorism, but they publicly support Hezbollah, which periodically attacks Israel across the south Lebanese border and has kidnapped three Israeli soldiers in the past three years.

The three governments deny that Hezbollah is terrorist, arguing it is a group that wages a legitimate resistance struggle against Israel's occupation of a tiny parcel of Lebanese territory. The United Nations says the territory in question belongs to Syria and was captured by Israel in the 1967 Arab-Israeli war.

Thursday's statement was phrased in terms that seemed designed to answer Lebanese critics of the Syrian military presence in Lebanon. The military said the arrests were executed "in cooperation with the security and intelligence apparatus of the sisterly Syrian forces."

Opponents of the government, particularly members of the Christian community, have long called for the withdrawal of Syrian forces, which entered as a peacekeeping force during the 1975-90 civil war. But the pro-Syrian government contends their presence is necessary to maintain stability and to counter what it calls the Israeli occupation.