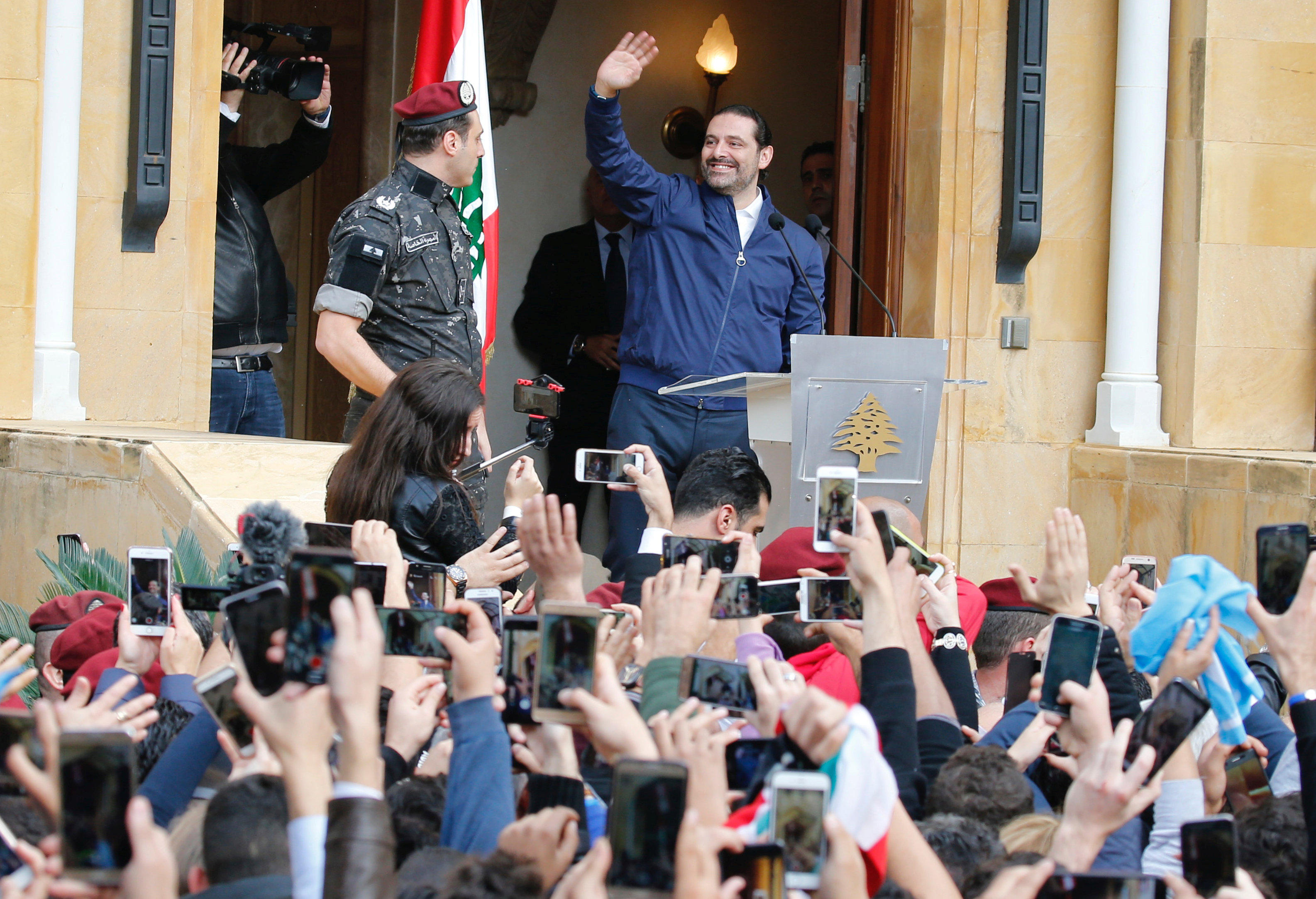 BEIRUT -- Lebanon's Prime Minister Saad Hariri announced on Wednesday that he was putting his resignation on hold to give way for more consultations, nearly three weeks after he unexpectedly announced he was stepping down.

It was a quick reversal - a day after his return to Lebanon - and a likely embarrassment to Saudi Arabia, which was widely seen as having orchestrated his resignation.

In conciliatory comments from the presidential palace, Hariri said he is putting Lebanon's interest first and is looking forward to a "real partnership with all political forces to put Lebanon's higher interest before any other interests."

He said he presented his resignation to President Michel Aoun at the presidential palace, but then responded to Aoun's request to take more time for consultations, "hoping it will constitute a serious opening for a responsible dialogue."

"Our beloved nation needs in this critical period exceptional efforts from everyone to protect it in the face of dangers and challenges," Hariri said in a statement after meeting with Aoun.

He reiterated the need for Lebanon to remain neutral on regional disputes and conflicts "and all that undermines internal stability and brotherly relations with Arab brothers."

Hariri's reversal highlights the latest Saudi foreign policy overreach under its young Crown Prince Mohammed bin Salman, who is seen as being behind most of the country's major decisions.

Under the bullish crown prince, who has the blessing of his father King Salman, Saudi Arabia has taken a much harder line against Iran, which has successfully spread its influence in the Arab region in recent years.

The crown prince, who is also defense minister, has a reputation for being both decisive and impulsive. He has led Saudi Arabia into a nearly three-year-long war in Yemen to try and push back Iranian-allied rebels there. A global outcry by aid groups over the tightening of a Saudi blockade in Yemen prompted the Saudis to say they would ease restrictions on urgently-needed humanitarian supplies.

In his mysterious resignation from Saudi Arabia, Hariri had said he was protesting what he called the meddling in Arab affairs by Iran, the Persian regional powerhouse, and its Lebanese ally, Hezbollah. Hezbollah is a partner in the coalition government formed by Hariri a year ago.

The televised resignation had sparked a political and diplomatic crisis as Lebanese officials accused the Gulf kingdom of pressuring the Sunni, Saudi-aligned politician to resign.

Top Lebanese officials accused Saudi Arabia of then detaining him in the kingdom for days. Feeling insulted, the Lebanese rallied around Hariri, unanimously calling for his return in what became an embarrassment to the kingdom.

Hariri's reversal appears to be a culmination of nearly three weeks of international pressure for Lebanon's delicate political balance to hold, though Saudi Arabia likely knew in advance of Hariri's decision to withdraw his resignation.

It constitutes a win for French President Emanuel Macron, whose mediation succeeded in getting Hariri out of Saudi Arabia to Paris for few days. He returned to Lebanon on Tuesday night following brief stops in Egypt and Cyprus.

By midday, a few thousand of Hariri supporters converged on his residence in central Beirut amid tight security, in a show of support. Hariri pledged to stay in Lebanon.

"There is nothing more precious than our country," he told them. "I am staying with you and I will keep going with you to be the first line of defense of Lebanon, its stability and its Arab nature."

Hariri then repeated a phrase he coined after the resignation: "Lebanon first."

Posters have been erected around Beirut and other cities welcoming Hariri's return.

"He brings unity to the people, Christians and Muslims. He is a good person and he will make Lebanon better," said Hassan Misto, an 18-year Hariri supporter.

Maha Yahya, director of the Beirut-based Carnegie Middle East Center, said Hariri's decision Wednesday doesn't mean the crisis is over but seems to open the door for calmer talks.

"Putting the resignation on hold now means there is still room for backdoor negotiations to try and figure a way out of this," Yahya said.

She added that there seems to be an international agreement not to "push this country over the precipice."

It remains to be seen, she said, what Hariri is demanding and how much room there is to negotiate in order "to at least arrive at some sort of acceptable modus vivendi."

Aoun did not accept the Nov. 4 resignation and said he wanted to hear from Hariri in person first.

Hariri's resignation plunged Lebanon in turmoil and triggered concern that the tiny country, which has enjoyed relative calm amid a Middle East on fire, would again be dragged to the forefront of the intensifying regional rivalry between Saudi Arabia and Iran.

It set off international efforts to prevent the upending of the country's delicate sectarian-based political order.

The announcement that he was stepping down was followed by sharp Saudi rhetoric against Hezbollah, which the kingdom accuses of meddling on Iran's behalf in regional affairs.

Hezbollah has been fighting on the side of Syrian President Bashar Assad in that country's six-year civil war, where many of Assad's enemies are rebels backed by Saudi Arabia.

Hezbollah says Saudi Arabia is sowing instability in Lebanon, and accused the kingdom of partnering with Israel to start a war with Lebanon.

Hariri, in his only in depth interview since announcing his resignation, told his media station Future TV that he could retract his resignation if a deal could be struck with his opponents to distance Lebanon from regional conflicts.