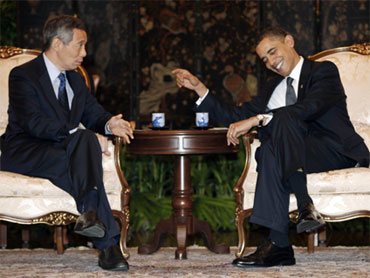 President Barack Obama and other world leaders agreed Sunday that next month's much-anticipated climate change summit will be merely a way station, not the once hoped-for end point, in the search for a worldwide global warming treaty.

The 192-nation climate conference beginning in three weeks in Copenhagen had originally been intended to produce a new global climate-change treaty. Hopes for that have dimmed lately. But comments by Obama and fellow leaders at a hastily arranged breakfast meeting here on the sidelines of an Asia-Pacific summit served to put the final nail in any remaining expectations for the December summit.

"There was an assessment by the leaders that it is unrealistic to expect a full internationally, legally binding agreement could be negotiated between now and Copenhagen which starts in 22 days," said Michael Froman, Obama's deputy national security adviser for international economic matters.

The prime minister of Denmark, Lars Loekke Rasmussen, the U.N.-sponsored climate conference's chairman, flew overnight to Singapore to present a proposal to the leaders to instead make the Copenhagen goal a matter of crafting a "politically binding" agreement, in hopes of rescuing some future for the struggling process.

A fully binding legal agreement would be left to a second meeting next year in Mexico City, Froman said.

Obama backed the approach, cautioning the group not to let the "perfect be the enemy of the good," Froman said. Addressing the Asia-Pacific Economic Cooperation forum later, Obama talked of the need to limit greenhouse-gas emissions "in Copenhagen and beyond."

Froman said the Danish proposal would call for Copenhagen to produce "operational impact," but he did not explain how that would work or to what it would apply.

A major bill dealing with energy and climate in the U.S., a domestic priority of Obama's, is bogged down in the U.S. Senate with scant hope it would be completed by next month, giving the American president little to show in Copenhagen.

It was unclear Sunday whether he would make the trip.

Obama arrived late Saturday night in Singapore for the annual 21-nation APEC summit that had begun without him early that morning. In remarks to the group Sunday, Obama reached out by announcing that he would host the 2011 gathering in his native Hawaii.

But on trade - the subject of most interest to rapidly growing, commerce-happy East and Southeast Asia - Obama had a good-news, bad-news message. He said the U.S. would engage with nations in a Trans Pacific free-trade partnership to shape a new regional agreement, a move seen as crucial to creating a possible Asia-Pacific free trade zone.

But he said the pact must have broad-based membership and "the high standards worthy of a 21st century trade agreement." He also sounded a sterner note, cautioning that Asia's export-led growth must give way to more balanced strategies.

His chief focus, though, was more on side meetings, including one later Sunday with Russian President Dmitry Medvedev where he hoped to nudge forward a major new arms-control pact. The two nations are in talks on a successor to a Cold War-era agreement that expires in December.

Obama and Medvedev agreed in April to reach a new nuclear arms reduction treaty to replace and expand upon the 1991 Strategic Arms Reduction Treaty before it expires on Dec. 5. Later, in Moscow in July, they agreed further to cut the number of nuclear warheads each nation possesses to between 1,500 and 1,675 within seven years.

U.S. officials say the two nations now have agreed on the broad outlines of a new treaty, which might be signed during Obama's travels to Europe in early December to accept the Nobel Peace Prize.

Obama also was sitting down with Indonesia's Susilo Bambang Yudhoyono, president of the world's largest Muslim nation and Obama's home as a boy.

And the President planned another milestone: joining a larger meeting of the 10-nation Association of Southeast Asian Nations that includes the leader of military-ruled Myanmar, also known as Burma. Obama is sure to face criticism at home, particularly from conservatives, for doing so.

A U.S. president has never met with a leader of the Burmese junta, one of the world's worst human-rights offenders.

In a final communique from that meeting, ASEAN leaders devoted a section to Myanmar. While the document calls for a general election in Myanmar next year to be "conducted in a free, fair, inclusive and transparent manner in order to be credible to the international community," it makes no mention of the release of political prisoners.

Obama, in a broad policy speech in Tokyo on Saturday, made a point of mentioning Aung San Suu Kyi by name and others imprisoned for political reasons.

But the leaders' statement does not make any mention of political prisoners - including Nobel Peace laureate Suu Kyi, who has spent 14 of the last 20 years in detention. The omission is glaring, given the U.S. had insisted on the inclusion of the clause in a previous draft.