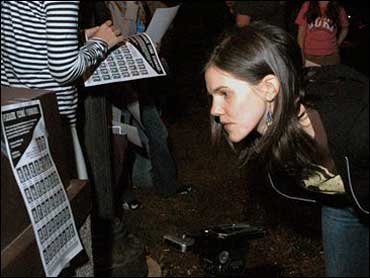 The lawyers for Duke men's lacrosse players said Thursday that police and an outraged community will owe the team an apology after DNA tests are completed – tests they said will prove no one on the team raped an exotic dancer.

Four attorneys representing nearly all the 46 players forced to give samples protested what they said was a presumption that their clients attacked the dancer or kept quiet about what happened. No one has been charged.

Investigators are still collecting evidence, but District Attorney Mike Nifong has said in recent days he already believes a crime occurred. Even if the state crime lab's DNA analysis proves inconclusive or doesn't provide a match for any of the athletes, Nifong has said he'll have other evidence.

"If the only thing that we ever have in this case is DNA, then we wouldn't have a case," Nifong said Wednesday.

"The victim was examined at Duke University Medical Center by a nurse who was specially trained in sexual assault cases," Nifong said. "And the investigation at that time was certainly consistent with a sexual assault having taken place, as was the victim's demeanor at the time of the examination."

This week, university president Richard Brodhead suspended the highly ranked team from play until the school learns more about the accusations. But Cheshire said Nifong and police have created a mob mentality that has tainted the men "before the evidence has all come out in a way that they will never recover."

"The lacrosse team, clearly, has not been fully cooperative" in the investigation, Nifong confirmed to Syler. "The university, I believe, has done pretty much everything that they can under the circumstances. They, obviously, don't have a lot of control over whether or not the lacrosse team members actually speak to the police. I think that their silence is as a result of advice with counsel."

English professor Melissa Malouf said she is one of those prepared for the DNA tests to prove inconclusive.

"I don't think the DNA is the case," she said after speaking at an outdoor protest near Brodhead's office. "Guys can wear condoms."

According to the application for a court order seeking DNA samples from the team, a nurse trained to treat rape victims and a physician who treated the woman said they witnessed symptoms consistent with sexual assault. The document also includes details of a search of the house where the woman said she was raped for about a half-hour.

"The victim's four red polished fingernails were recovered inside the residence consistent to her version of the attack. She claimed she was clawing at one of the suspect's arms in an attempt to breath (sic) while being strangled. During that time the nails broke off," the police statement said.

Officers who searched the house also recovered the woman's makeup bag, cell phone and a stack of $20 bills consistent with the woman's statement that $400 in cash was taken from her purse after the attack, the police statement said.

Police have also searched a second home occupied by lacrosse team members, but documents describing the location or what investigators found have been sealed by court order, prosecutors and police said.

Prosecutors asked the entire team to contribute DNA samples. When some declined on the advice of attorneys they hired, Nifong said he sought the court order for samples from all but the team's lone black member. The woman, a black student at nearby North Carolina Central, has said her attackers were white.

The case has prompted daily protests since Saturday, intensifying the undercurrents of privilege and race in a blue-collar city of 200,000 that is 44 percent black while home to one of the nation's elite universities.

"I guess one of the best ways to describe this is we have the potential for a perfect storm," North Carolina Central chancellor James Ammons said. "You have all of these issues that we're going to have to discuss."

Ammons met Thursday with Brodhead, Durham Mayor Bill Bell and several of the city's black leaders to discuss the case.

Brodhead invited about a dozen people to the meeting at Duke because "he wanted to feel the pulse of the community and he wanted our help in sharing information and our thoughts to help Duke deal with this situation," Ammons said.