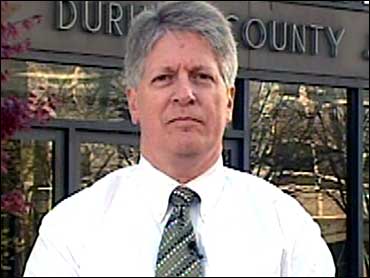 The district attorney overseeing the probe of charges by an exotic dancer that she was beaten, choked and raped by three members of the highly-ranked Duke University lacrosse team says her allegations were confirmed by a medical exam.

The team has been suspended indefinitely as the investigation moves forward.

The assault is said to have happened in an off-campus house earlier this month at a party for which the woman was hired to perform.

An annual campus rally against sexual violence happened to fall on Wednesday night, and Strassmann says it spotlighted heightening tensions surrounding the charges. It was the latest in a series of protests demanding accountability for the crime.

"The victim was examined at Duke University Medical Center by a nurse who was specially trained in sexual assault cases," Nifong said. "And the investigation at that time was certainly consistent with a sexual assault having taken place, as was the victim's demeanor at the time of the examination."

Members of the lacrosse team have stopped talking to police, Strassmann says.

"The lacrosse team, clearly, has not been fully cooperative" in the investigation, Nifong confirmed to Syler. "The university, I believe, has done pretty much everything that they can under the circumstances. They, obviously, don't have a lot of control over whether or not the lacrosse team members actually speak to the police. I think that their silence is as a result of advice with counsel."

At the Wednesday night rally, Strassmann says, emotions stood out, with protesters shouting, "Yes means yes, no means no."

No one has been arrested, he points out, but Duke itself is already on trial amid accusations the school coddled athletes who may be rapists and racists.

Forty-six players gave DNA samples and, Duke officials say, some of the criticism is unfair.

Duke President Richard Brodhead told reporters, "Our information is the students gave lengthy statements in response to police inquiries, even before they had lawyers present."

The dancer claims players used racial slurs and a neighbor says he heard some of it. And two women passing by claim they were called racial names, and dialed 911.

"The racial slurs involved are relevant to show the mindset … involved in this particular attack," Nifong told Syler. "And, obviously, it made what is already an extremely reprehensible act even more reprehensible."

Players now wait for their most critical test results ever in college, Strassmann notes, from the DNA lab, due next week.