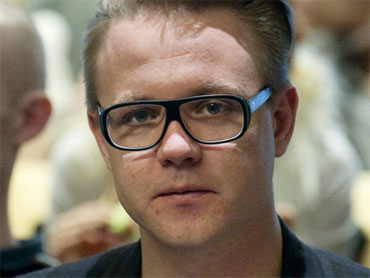 In Parliament he's Fredrick Federley, a serious and respected representative of the small Center Party. But a few times a year he becomes Ursula, a "grandiose diva" with curved eyelashes, pouting lips and skimpy dresses.

In tolerant Sweden, the 31-year-old politician's cross-dressing habit only became an issue this week, when critics questioned who accepted an alleged junket to the sun-soaked Canary Islands: Fredrik the lawmaker or Ursula the drag queen?

Federley makes no secret of his penchant for dressing in high heels, colorful wigs and heavy makeup. It has not been an issue in his party or in Parliament, and Federley says it doesn't affect voters' confidence in him as a politician.

"The Swedish people are wise enough to see that they are two totally different things: When you're on official duty or when you're at a party as a hired entertainer," he told The Associated Press on Thursday.

But Sweden's biggest newspaper this week questioned whether the two personalities got mixed up when he moonlighted last month as a travel writer for hanky.se, a Web site catering to Sweden's gay community.

Federley and his boyfriend were invited to Gran Canaria, the biggest in the Spanish island group, where they visited hotels and spas, and Federley dressed in drag to visit an entertainment complex ahead of its annual drag-show festival. He wrote a travel report about the four-day trip and billed the Web site for his work and travel expenses.

However, tabloid Aftonbladet reported the trip was sponsored by a range of different companies including a low-budget airline, and suggested that represented a conflict of interest for him as a lawmaker.

When the newspaper pressed him on the issue, Federley said: "It wasn't me as a parliamentarian doing this but I was traveling more as a drag personality."

The comments sparked dozens of angry and mocking responses from readers on the paper's Web site and in the blogosphere - including postings on Federley's own blog. However, the issue didn't generate any widespread uproar and Swedish politicians largely stayed away from it.

Federley told AP the quotes were taken out of context. He said he meant that Ursula was the focal point of the assignment but wasn't suggesting that meant different ethical standards applied. The trip was a legitimate work assignment that didn't represent any conflict of interest for him as a lawmaker, he said.

Swedish lawmakers are allowed to have jobs on the side as long as they are open about their activities and their income. Federley said he made the equivalent of about $2,000 last year on side gigs, including lectures and appearances as Ursula, whom he described as a "grandiose diva" interested in "the fashion industry, catwalks and glamour parties."

"My economy is fine without this," Federley said. "But if I have the opportunity to do fun extra work, I'm happy to do it."

Center Party spokesman Roger Tiefensee said he had no problems with Federley's trip to the Canary Islands or other Ursula appearances because they didn't influence his job in Parliament.

"I have no opinion about what a member of Parliament does on his free time, as long as it's not illegal," Tiefensee said.

He said the fact that most of the criticism revolved around a potential conflict of interest, rather than Federley's drag persona, showed how far Sweden has come in accepting different sexual orientations.

"It's not controversial and no one is questioning him as a member of Parliament based on his drag personality," Tiefensee said.