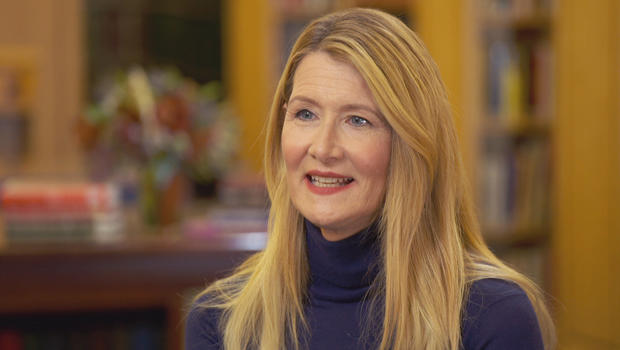 What a year it's been for Laura Dern. She's in two Oscar-nominated movies: as the kind-hearted mother of the March sisters in "Little Women"; and as a razor-sharp divorce lawyer in "Marriage Story." She's kind of fierce, but it's the kind of fierce that makes award voters take notice.

Dern won a Golden Globe for "Marriage Story" earlier this month, and this past Monday she was nominated for an Oscar.

Correspondent Tracy Smith asked, "So, you've gotten accolades for your work before through the years, steadily. But it seems like there's something about this moment that is rather intense. Does it feel that way to you?"

And a lot of that excitement is about her monologue on motherhood, written by "Marriage Story" director Noah Baumbach:

"We can accept an imperfect Dad. Let's face it, the idea of a good father was only invented like 30 years ago. Before that fathers were expected to be silent and absent and unreliable and selfish, and we can all say that we want them to be different, but on some basic level we accept them. We love them for their fallibilities. But people absolutely don't accept those same failings in mothers. We don't accept it structurally, and we don't accept it spiritually, because the basis of our Judeo-Christian Whatever is Mary, Mother of Jesus and she's PERFECT. She's a virgin who gives birth, unwaveringly supports her child, and holds his dead body when he's gone. But the Dad isn't there!'"

Smith asked, "I'm curious what you thought when you first read those words."

"I read the script, and I called Noah and got his voicemail and cried into his machine for about 10 minutes," Dern said. "And when I read the monologue and called him, I said, 'This is the greatest Christmas present I've ever received.'"

Dern even added a line of her own: "We added a little more of a zinger, which really makes me laugh, that I don't even think I can say. 'God didn't even do the f*****g, which I know cannot be on 'CBS Sunday Morning'! 'Cause it's CBS, and it's Sunday morning!"

It's worth noting that some of these scenes were shot in an actual law office. In fact, it was where Dern met with her own lawyer when she filed for divorce from musician Ben Harper.

For Dern, it seems Hollywood and real-life have often been intertwined, ever since the very beginning.

If you're a real fan of biker movies, you might remember the 1966 film "The Wild Angels" – and two of the wildest angels were Bruce Dern and his blonde girlfriend Diane Ladd. Seems they were pretty close off-camera, too.  Around nine months after filming wrapped, Dern and Ladd had another premiere.

"You were literally conceived on a movie set?" asked Smith.

"Yes. True. One hundred percent true," Dern said. "Even better, on a Roger Corman biker movie. I feel very proud of that!"

Smith met Dern at the Motion Picture Academy's Margaret Herrick Library in Beverly Hills, where they keep more than 12 million photos – and a few things not even she's ever seen, like her birth announcement: "Actor Bruce Dern and wife, actress Diane Ladd, are parents of daughter born Febr. 10."

"No! Oh my God, that's so beautiful!" she exclaimed.

Having Hollywood parents helped, a little at least:  In 1974, when Diane Ladd was shooting "Alice Doesn't Live Here Anymore," Laura landed a cameo, sitting at the diner counter with an ice cream cone.

And she was her mom's date to the 1975 Oscars. Looking at photos, Dern said, "I'm probably six or seven, and I look terrified!"

A few years later, she was in movies of her own. Still, Dern said she planned on getting a college degree. But Hollywood intervened.

She went to UCLA for two days ("Which I loved"), but just then she was offered a big role in director David Lynch's landmark film, "Blue Velvet."  She asked the school if she could take a leave of absence, and was turned down.

"They kind of disparaged the movie, too, didn't they?" asked Smith.

"Yes. Like, 'This is crazy to go do this radical, kind of insane project and give up your college career,'" Dern recalled. "They're like, 'It's one movie. You can wait 'til you get out of college.' But I knew that it wasn't just one movie."

"Blue Velvet" made her a next-level star, and Lynch put her in other films, like 1990's "Wild at Heart."

She also found time to work with other directors, like Steven Spielberg, in "Jurassic Park."

Seems whatever role she played, she was always pushing boundaries, like in 1997, when she played the gay friend that Ellen Degeneres came out to on her sitcom. Dern helped make history – but she paid a price. She didn't work for a year after that.

"I didn't. And it was a crazy time," she said. "It was, in a way, the most successful time of my career; 'Jurassic Park' had just come out, so it was a great time, and then a very still moment."

Her career came back, of course, and with a vengeance. Dern won an Emmy for her role in HBO's "Big Little Lies," as a woman whose husband loses all of her money.

And talk about range: she was also a "Star Wars" heroine on a suicide mission:

But that's no surprise: After a lifetime spent walking right up to the edge, Laura Dern has somehow found balance there.

Smith asked, "What do you think of the term 'the Dernaissance'?"

"I mean, it sounds fantastic," she said. "I'm not sure what it is! It really is an amazing time of getting to do all of it seamlessly. And now, there really is a different kind of freedom. That's why we take risks, right? And why we say yes to things, because you never know what beautiful gift is awaiting you when you do."