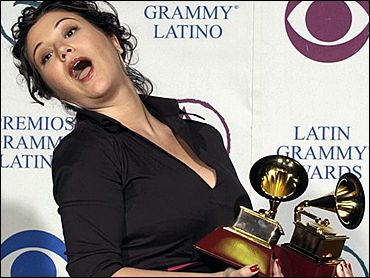 The carpet was green, the fashion red hot, and the music unstopppable. National correspondent Hattie Kauffman was at fifth annual Latin Grammy awards in Los Angeles to get the Latin beat.

The band, Ozomatli turned the Shrine Auditorium into one big party.

The Los Angeles band was so eager to perform, members started singing even before entering the auditorium.

"The magic is that we feel it," says Grammy nominee, Alejandra Guzman. "I feel it in my bones."

When it comes to Latin music, salsa is not the only thing that should come to mind.

Mexican singer and actress Paulina Rubio says, "It's all about the passion for sure, that's the first thing, love and passion."

Actor Esai Morales says, "I tend to like this Grammy night better than the other one. It's more exotic."

And before you know it, you're dancing.

"I love the Latin communtiy," Simpson says. "They sing with so much passion, and it's all from the heart."

The big winner was long-time Spanish favorite Alejandro Sanz, who collected four Grammys including Album of the Year.

But first, Draco Rosa said, "With this performance I usually live it as if it's my last. Every performance anywhere around the world."

The Latin Grammy's Man of the Year, Carlos Santana, brought down the house when he led a tribute to Richie Valens, whose real name was named Richie Valenzuela, by playing "La Bamba."