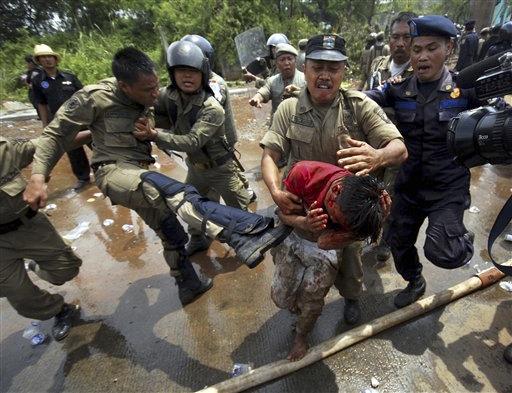 The Latin Grammys will be handed out Wednesday night on CBS. And one of today's biggest Latin stars is someone everyone knows, Carlos Santana.

How old were you when you heard your first Santana song? The range could be anywhere from 15 to 50!

Honored as Person of the Year by the Latin Academy of Recording Arts and Sciences, the star and his music were celebrated Monday in an all-star tribute. Santana is also being recognized for his humanitarian efforts. Santana's "Milagro Foundation," which he founded with his wife, Deborah, raises money for youth acvitities, including the arts.

The Early Show National Correspondent, Hattie Kauffman sat down with Carlos Santana at his rehearsal studio in Northern California, where he revealed just what fuels his Latin-fired rock.

Santana compares his guitar to a woman. "There is a lot to discover. And sometimes it can be very feisty," he says. "All of the dimensions that a woman goes through from a child to a woman with an attitude."

Santana became a star long before the term "crossover success" was coined.
It was in Woodstock of 1969 that the world first discovered him with his performance of "Soul Sacrifice."

But over the years, there came a time when Santana's music no longer fit radio's Top 40 play list. That changed in 1999, when he collaborated with Rob Thomas of Matchbox Twenty.

Spoken like the survivor he is. As a child, he played songs for tourists on the streets of Tijuana. By age 10, he was being sexually abused. Keeping it a secret, he allowed anger to simmer within him for most of his life. Some 30 years later, Santana admitted the abuse to his wife, who got him into therapy. Today, he shares his story to help others shed their shame.

"My life is a triumph," he says. "Even at the point where I was molested as a child, I used that as a trampoline to liberate other men. Cry about it, let it go and move on. Look in the mirror and say to yourself, 'I am innocent and I am beautiful and I am pure. And I am not what happened to me.' So for me, I utilized all those things. And I keep saying, my life is a truimph and I will not allow the media or anyone to make a tragedy, or casualty, or victim out of me."

Santana hits transcend the years. These days, he often records with the other industry giants like Eric Clapton and Dave Matthews. Once again a defining force in music, Santana promises more magic to come.

You can see a special performance by Santana on the Latin Grammys on CBS, Wednesday at 8:00 p.m. ET/PT.