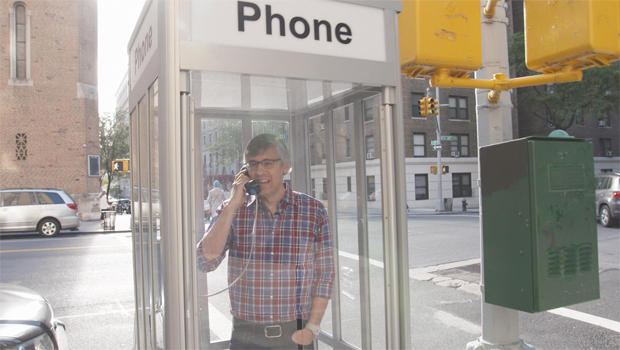 For some of our younger viewers, a phone booth might as well be a monolith from another world. With Mo Rocca, we remember the good old days...

Some of you may recognize this coin-operated curiosity: It’s called a phone booth.

Phone booths used to be everywhere, providing an office for agent Maxwell Smart … and a sanctuary for Tippi Hedren from killer seagulls in “The Birds.”

Now, they’re so rare that Peter Ackerman wrote a children’s book, “The Lonely Phone Booth,” about one of only four remaining outdoor phone booths in all of Manhattan.

“I walked past this phone booth every day with my kid when he was three years old,” Ackerman said. “And at a certain point, he said to me, ‘Why is that phone in a box?’ And I realized that he didn’t know what a phone booth was, which is so bizarre!”

For kids, the phone booth has become something of a novelty. But grownups can’t be bothered.

The first public coin-operated pay phone appeared in Hartford, Conn., in 1889. The first phone booth debuted in the early 1900s.

The 1970s bought those semi-enclosed pedestal-style pay phones which, for most of us (Superman included) found lacking.

By the 1990s there were nearly three million pay phones in America. But now just a small fraction remain.

Mark Thomas keeps track of the ones that are left. He created the Payphone Project, an online database of pay phones from around the world.

Rocc asked, “What did the payphone do to deserve this?”

“Well, the payphone didn’t do anything; the cell phone came along,” Thomas replied.

That’s right: our phones got so smart they began putting pay phones out of business.

“Do you see the cell phone as sort of an arriviste, as someone that sort of came along and stole the thunder of the payphone?” Rocca asked.

“It stole its relevance. And it made communication so simple and so trivial even, that [the pay phone] became a laborious way to make a phone call.”

In New York (and maybe coming to a city near you), pay phones are being replaced by kiosks offering phone calls, free wifi, Internet service, and a port to charge your cell phone.

Jen Hensely, who works for the company installing them, explained: “People are on their phones all the time. And this allows them a free way to offload their data plans for people who don’t have access to mobile plans or data. We’re offering that for free. So we think it’s a really important public service.”

Rocca gingerly approached the sleek and shiny upstart and called the only person whose number he actually still remembers: his mother.

Well, he can’t blame the kiosk for his mother hanging up on him. Yet even with all the kiosk’s bells and whistles, Mo’s heart belonged to the old-timey phone booth.

The sound of a quarter dropping, the dial tone, the operator saying “Thank you” …

Yes, there’s nothing like reaching out and touching someone from a phone booth.

Oh, and it turns out Manhattan’s four remaining outdoor phone booths are free! (Yes, we got our quarters back!) So now everyone will want to use the pay phone!