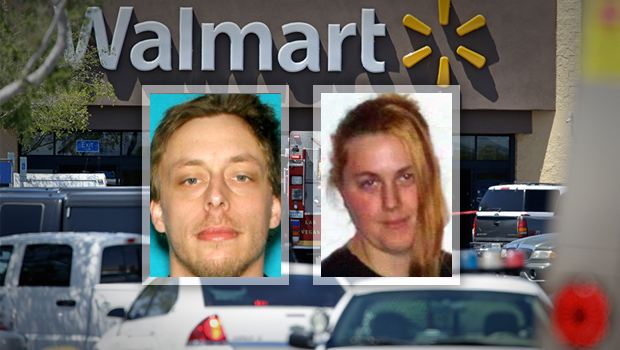 A couple who fatally shot two police officers having lunch at a Las Vegas pizza restaurant left a swastika and a "Don't tread on me" flag on the dead officers, then continued their deadly rampage at a nearby Wal-Mart, authorities said Monday.

Assistant Sheriff Kevin McMahill said the two suspects, Jerad Miller and his wife, Amanda, had ideology that was along the lines of "militia and white supremacists" and that law enforcement was the "oppressor."

McMahill said the shootings were an isolated act and officers were still looking for a motive.

The two officers were having lunch at a strip mall pizza buffet when the Millers fatally shot them at point-blank range in an ambush. The suspects then fled to a nearby Wal-Mart, where they killed a third person and then themselves in an apparent suicide pact, authorities said.

The attack at a CiCi's Pizza restaurant killed Officers Alyn Beck, 41, and Igor Soldo, 31, who are both husbands and fathers. Jerad Miller yelled, "This is a revolution!" McMahill said.

McMahill said at a news conference Monday that both suspects fired multiple shots into Beck. They then placed a note, a yellow "Don't tread on me" flag and a swastika on the officers' bodies.

The deadly rampage in the aging shopping center about 5 miles northeast of the Las Vegas Strip took place in a matter of minutes.

Police were called at 11:22 a.m. to the pizzeria. Shots were reported five minutes later at a nearby Wal-Mart, where the shooters gunned down 31-year-old Joseph Wilcox of Las Vegas just inside the front door and exchanged gunfire with police before killing themselves, authorities and the Clark County coroner's office said.

McMahill said Wilcox had a concealed weapon and "heroically" tried to confront Jerad Miller, not realizing that he was accompanied by Amanda Miller, who shot and killed Wilcox, police said.

Assistant Sheriff Joe Lombardo said the police department has doubled its number of on-duty officers. He said the increased staffing would continue indefinitely.

The suspects had been kicked off a ranch where anti-government protesters faced down federal agents earlier this year. Ammon Bundy, the son of rancher Cliven Bundy, toldThe Associated Press that Jerad and Amanda Miller were asked to leave his father's ranch after being there for a few days this spring.

Ammon Bundy said that while details are still sketchy, the Millers' conduct was the problem. He called the couple "very radical" and said they didn't "align themselves" with the protest's main issues.

Bundy and his supporters, some of them armed militia members, thwarted a Bureau of Land Management roundup of his cattle near Bunkerville in April. The BLM says Bundy owes more than $1 million in grazing fees and penalties for trespassing without a permit over 20 years, but he refuses to acknowledge federal authority on public lands.

Ammon Bundy said his family "has had no quarrel" with Las Vegas police and disavowed the Millers' actions. "The only thing worse than tyranny is anarchy, and we certainly recognize that," Bundy said.

CBS affiliate KLAS reports that Jerad Miller had a Google+ account where he talked about being at the Bundy ranch when protesters showed up in force to protest the government's attempt to reclaim land Bundy was using for illegal grazing. Miller was upset because he had been shunned by other protesters.

The Millers moved to the Las Vegas area in January, police said.

Amanda Miller had worked at a Hobby Lobby craft store in Las Vegas, the chain store said in a written statement, but was no longer employed there.

Jerad Miller, 31, was convicted of felony vehicle theft in Washington state, police said. He also had a criminal record in Indiana.

Miller and his 22-year-old wife were married in August 2012, according to a marriage license on file in Indiana.

Gov. Brian Sandoval ordered flags to be flown at half-staff through sunset Friday for Officers Beck and Soldo.

The governor, in a statement, said "their commitment to protecting the public and serving the community will be forever remembered."