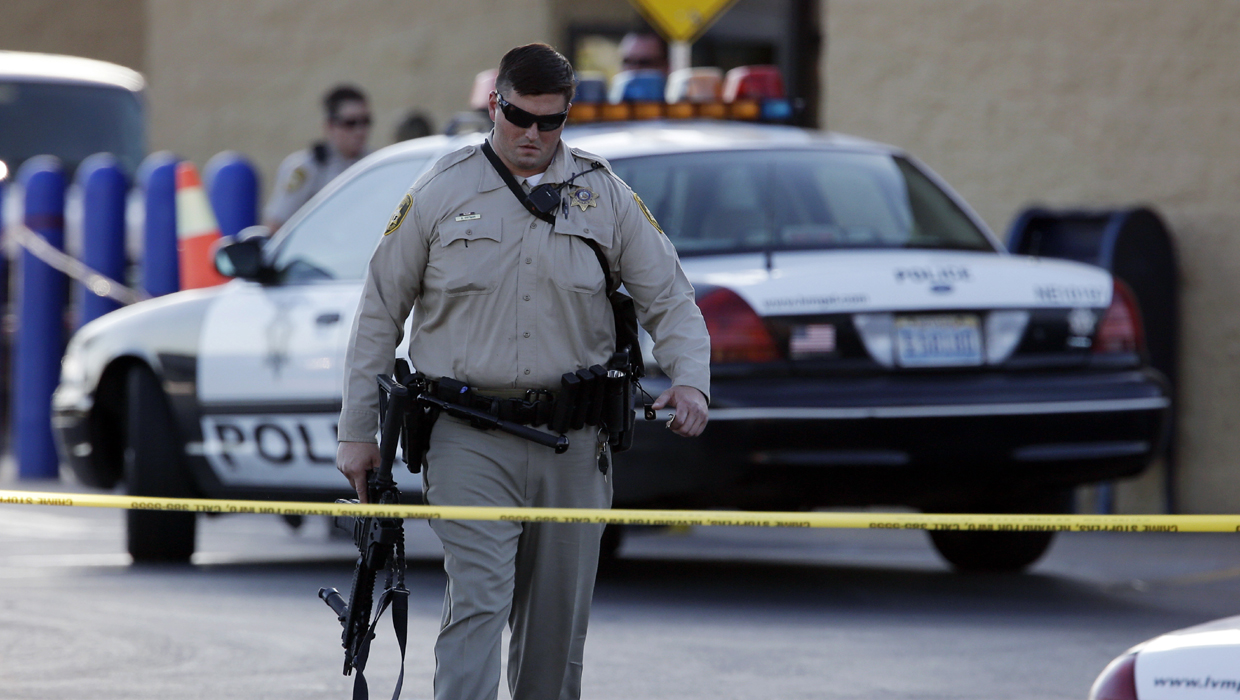 LAS VEGAS - After a man and woman reportedly killed two police officers and one civilian in a pair of shootings in Las Vegas Sunday, the suspects' neighbors told the Las Vegas Sun the unidentified shooters had a radical agenda and wanted to commit "the next Columbine."

The paper reports residents at the Oak Tree Apartments where the couple apparently lived said the suspects often would share their racist, anti-government views. Neighbors said they bragged about their gun collection and claimed to have spent time at Nevada rancher Cliven Bundy's property during a standoff with federal government agents in April.

Brandon Moore, who lives at the apartment complex, told the Sun the suspects said they planned to commit a mass shooting. "They were handing out white-power propaganda and were talking about doing the next Columbine," said Moore.

The initial attack Sunday at a CiCi's Pizza restaurant officers Alyn Beck, 41, and Igor Soldo, 31, both husbands and fathers. One of the shooters yelled, "This is a revolution," but a motive remains under investigation, said Las Vegas police spokesman Larry Hadfield.

The deadly rampage in a shopping center about five miles northeast of the Las Vegas Strip took place in a matter of minutes. Police were called at 11:22 a.m. to the pizzeria, where one of the officers was able to fire back at his assailants. It's unclear whether he hit them, Sheriff Doug Gillespie said.

Shots were reported five minutes later at a nearby Wal-Mart, where the shooters gunned down a person just inside the front door and exchanged gunfire with officers, police said. Then, the female suspect shot the male suspect before killing herself, Gillespie said. The civilian victim's identity hasn't been confirmed, and the suspects' names haven't been released.

"No one associated [with them], but everyone knew these people," said resident Sara Andrea. She told the paper the assailants would occasionally walk around town dressed as The Joker and Harley Quinn, characters from Batman comic books.

Around 9:30 p.m. Sunday, after clearing the apartment building, locals reported hearing an explosion at the complex. By 11 p.m., the Sun reports a convoy of SWAT vehicles were seen leaving the building. Law enforcement declined to comment on the incident.