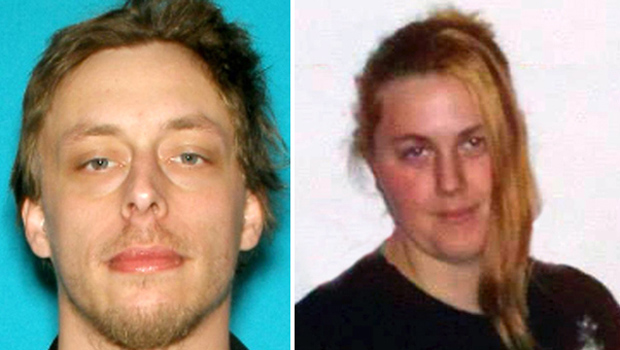 LAS VEGAS -- His face painted to look like the comic book villain the Joker, a man who would months later gun down two police officers and a good Samaritan punctuates his political rant with manic glares at the camera. In another online video, Jerad Miller warns that police can't be trusted.

"What better way to kill and rape, after all, if you're wearing a badge," he says. "When law enforcement and government are the criminals, they will fear an armed and educated people."

Investigators in Las Vegas are studying those videos and a range of other social media posts by Miller, 31, as they try to untangle what led him and his 22-year-old wife to gun down two police officers and a civilian before taking their own lives.

Capt. Chris Jones of the Las Vegas Police Department's Southern Nevada Counter-Terrorism Center identified Miller as the man in the videos, which decry what Miller sees as a tyrannical American government.

CBS affiliate KLAS reports that in one video, a tearful Miller talked about the "new world order" and how he wished they could "wake up" their families.

The couple left a swastika and a "Don't tread on me" flag on the body of one of the two officers they killed and promoted an ideology shared by "militia and white supremacists," including the belief that law enforcement was the "oppressor," authorities said Monday.

Their views were apparently too extreme for anti-government protesters who faced down federal agents earlier this year at a Nevada ranch.

The Joker videos were posted on YouTube with a time stamp just before the 2012 presidential election, a few months after Jerad and Amanda Miller married.

Authorities believe they came to the Las Vegas area in January. This spring, they went to the ranch of Cliven Bundy, who along with armed supporters thwarted a roundup of Bundy's cattle by the U.S. Bureau of Land Management, which wants to collect more than $1 million in grazing fees and penalties.

Militias at the ranch kicked the Millers out after a few days, according to Ammon Bundy, one of the rancher's sons.

"They were very radical, you know, and did not align themselves with the reason that the protesters were there," Ammon Bundy said. "Not very many people were asked to leave. I think they may have been the only ones."

CBS affiliate KLAS reports that Jerad Miller had a Google+ account where he talked about being at the Bundy ranch. Miller was upset because he had been shunned by other protesters.

On Sunday, the two police officers were having lunch at a pizza buffet in an aging strip mall about 5 miles northeast of the Las Vegas Strip when the Millers fatally shot them. The attack at a CiCi's Pizza killed officers Alyn Beck, 41, and Igor Soldo, 31, both of whom were husbands and fathers of young children.

About 100 people attended a candlelight vigil for the slain officers at CiCi's Pizza on Monday night, the Las Vegas Review-Journal reported.

According to Assistant Sheriff Kevin McMahill, this is how Sunday's events unfolded:

The Millers left a neighbor's apartment where they had been staying around 4:30 a.m. and walked for hours until they reached the strip mall about 5 miles away.

Around 11:20 a.m., the Millers went into the restaurant, where the two officers were sitting in a booth. Jerad Miller fatally shot Soldo; as his partner tried to react, Miller shot Beck in the throat. Amanda Miller then pulled her own gun, and both shot Beck several times.

Police believe that while the Millers wanted to target police, the choice of Soldo and Beck was random.

The couple took the officers' guns and ammunition and left on Beck's body a yellow flag featuring the phrase "Don't tread on me." The flag, with its roots in the American Revolution, is a symbol for anti-government groups. Police said they believe the material with a swastika printed on it that was also left on the body was intended to paint police as Nazis.

The couple went next to a Wal-Mart across the street, where Jerad Miller entered, fired one round and "told the people to get out and this was a revolution and that the police were on the way."

In the frenzy, shopper Joseph Wilcox decided to confront Jerad Miller. Wilcox, 31, went from the returns area to Miller and pulled his concealed firearm. But before he could fire, Amanda Miller shot him in the ribs and Wilcox collapsed.

By now, police had arrived, and two five-officer teams entered the massive store.

As police closed in, Amanda Miller shot her husband several times with a handgun, killing him. She then shot herself in the head.

Jerad Miller had been convicted of felony vehicle theft and other offenses in Washington state between 2001 and 2003, according to a Washington State Patrol database. He also had a criminal record in Indiana.

Although police believe the shootings were an isolated act, not part of a broader conspiracy to target law enforcement, Sheriff Doug Gillespie said Monday he was pairing officers together for safety. For now, 300 will be on patrol at any given time - twice what is normal.

Asked about worries that more officers may be targeted, he responded: "Is that weighing? Sure, there's no doubt about it."