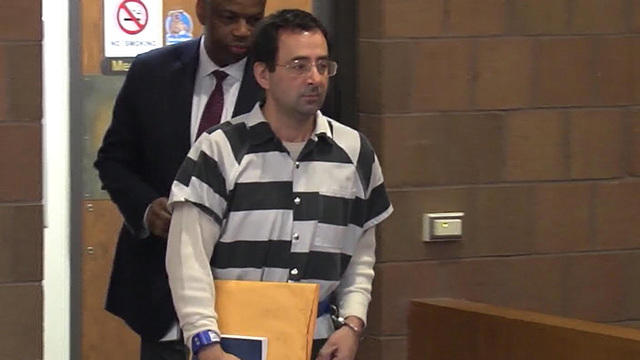 MASON, Mich. -- A judge on Friday ordered a longtime doctor at Michigan State University and USA Gymnastics to stand trial on charges of sexually assaulting six young gymnasts who said he molested them while they were seeking treatment for various injuries.

Judge Donald Allen Jr. made his decision after hearing testimony from the alleged victims over two days and watching a campus police interview of Dr. Larry Nassar.

It is one of four Michigan criminal cases against Nassar following reports last year in the Indianapolis Star about how USA Gymnastics, which trains Olympians, mishandled complaints about sexual misconduct involving the doctor and coaches. Women and girls said the stories inspired them to step forward with detailed allegations of abuse, sometimes when their parents were in the exam room at Michigan State.

Nassar didn't testify nor did his lawyers offer an argument against sending the case to trial. The legal threshold in Michigan is probable cause, a low standard at the initial stages of a criminal case.

The final evidence Friday was a video of Nassar's 40-minute interview last August with a Michigan State police detective, who was investigating a complaint from a former gymnast, now in her 30s. He was not under arrest and spoke voluntarily.

Nassar denied any inappropriate contact and said he got no sexual pleasure from treating gymnasts. He said if he had an erection, as a gymnast claimed, "that's rather embarrassing."

The camera was above Nassar's head. He repeatedly moved his arms and hands as he explained his techniques, using phrases such as "lift and shift" and "tissue tension" to describe treatments for back and hip injuries. He sighed, scratched his forehead and appeared frustrated with the allegations against him.

"I'm trying my best to help the patient. I'm trying to get real-time feedback. I don't want to hurt someone," Nassar told Det. Sgt. Andrea Munford.

The judge watched the video and later noted that Nassar had put his fingers in a position that matched the testimony of one of the alleged victims, who said the doctor had penetrated her with his hands in 2000.

"He would put his fingers inside of me and move my leg around. He would tell me I was going to feel a pop. And that that would put my hips back and help my back pain," Dantzscher "told 60 Minutes." She said she started treatment with Nassar when she was as young as 13 or 14.

"Every victim who testified was unambiguous" about being molested, Poviliatis said. "They were clear and consistent and precise."

Outside of the criminal cases, Nassar and Michigan State are being sued by dozens of women and girls. Indianapolis-based USA Gymnastics also is a defendant in some of the lawsuits.

Speaking to "60 Minutes," gymnast Jessica Howard said at first she "felt very lucky" to have a spot at the Karolyi ranch, run by former Team USA coaches Bela and Martha Karolyi. But she told "60 Minutes" that she was molested by Nassar during treatments at the ranch.

"I remember thinking something was off but I didn't feel like I was able to say anything because he was, you know, this very high-profile doctor," Howard said.