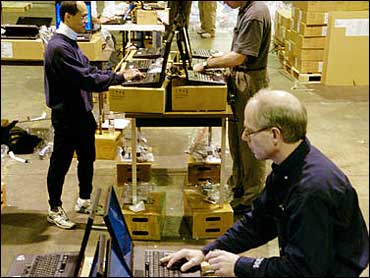 Dozens of employees pulled an all-nighter in a dimly lit warehouse to install software on the computers; test the laptops, fingerprint scanners and webcams; and box them up before they were shipped out starting Monday.

"You're dealing with a great deal of investment by people in time, money and personal sacrifice, and that all adds to the complexity of getting this done," said a bleary-eyed George Beaudin, chief operating officer of Laser Data Command.

His company makes software that will collect fingerprint and photo data of victims and survivors, store it in a database and produce a two-dimensional bar code that contains information from each person.

The undertaking would have cost millions of dollars, but none of the companies charged for its equipment or services, said Brian Anderson, chief executive officer of Anderson Cargo, which packed the computers for shipping and assisted with logistics.

Why Florida researchers are bashing in the brains of iguanas

"They needed something that was plug-and-play, that they could use on the ground," Anderson said. "You couldn't send all of this in from five vendors and expect them to get it to work over there."

After victims are identified, relief workers can use the equipment to help produce new travel and other documents for survivors who lost such items in the disaster.

The computers will aid in the difficult process of confirming identities, said Dhama Dhamavasi, consul at the Royal Thai Consulate General in Chicago.

The sooner relief workers find out who the victims are, the sooner their bodies can be disposed of, helping suppress disease outbreaks from decomposing remains as well as providing answers to surviving relatives.

"We don't have the facilities to put all these bodies in cold storage," Dhamavasi said. "It's very difficult for us to identify the victims, especially in a drowning. The bodies decompose very quickly in a tropical country like Thailand."

Beaudin said Laser Data Command jumped when IBM called with the idea of donating the laptops a week ago.

The company typically sells its PassPro software for airport security and health benefit card applications. It had foreseen identifying disaster victims as another possible benefit, but this will be the software's first use for that purpose.

Two Laser Data Command employees left for Thailand over the weekend to work with IBM officials there. IBM staffers in Thailand will work with authorities there to get the laptops to relief workers.