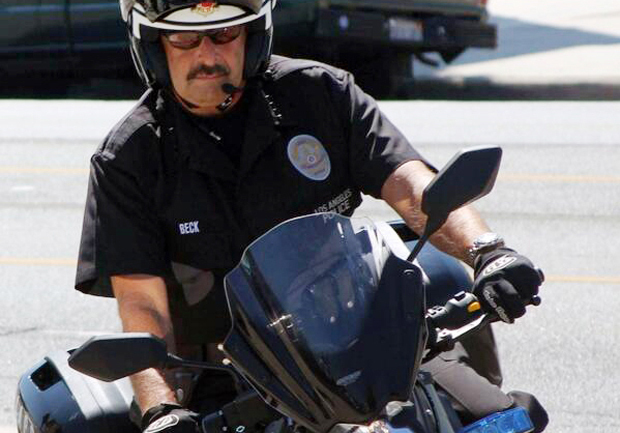 An avid motocross racer, Beck parked the bike just yards away from where retired police cars from the 1930s to 1950s now rest.

It was a striking study in contrasts and a visual of the LAPD's continuing efforts to upgrade its technology. The department, under Beck's direction, is now testing two types of electric motorcycles as part of an effort to increase efficiency, decrease its carbon footprint and ultimately cut costs.

Such electric bikes are already used by a growing number of police departments across the country, from New York to Oregon, and around the world, including in Bogota, Colombia and Hong Kong.

It's a different, somewhat sleeker look than the burlier gas-powered BMW and Harley Davidson motorcycles that the department uses today.

The department hopes, however, the bikes will become a regular sight in its fleet of tomorrow, said Sgt. Dan Gomez, who oversees the LAPD's adoption of new and emerging technology.

The department has been testing police versions of the $24,995 "Empulse LE" by Brammo, Inc., based in Ashland, Ore., since late August and the $17,945 "DS" by Zero Motorcycles, based in Scotts Valley, Calif., for the last couple weeks.

Those costs, without additional department modifications, compare to the roughly $35,000 for a fully-equipped LAPD Harley or BMW, Gomez said.

Though the electric bikes are often used for racing, a range of less than 130 city and highway miles means officers likely won't be heading on any lengthy chases or zigzagging far across town on them.

Both bikes take about seven hours to gain a full charge through a typical wall outlet, though using specialized equipment will bring charge time down by several hours.

Gomez said testers will look at how the more limited range may impact officers.

That, they say, means fewer bikes need to be bought because they're less likely to be out of commission.

Such testing is in addition to the department's other green efforts. They've adopted hybrid vehicles for some of its command staff cars and three-wheel electric vehicle for patrols around areas such as Staples Center and Hollywood Boulevard, Gomez said.

Testing could take some time, Gomez said, but once completed the department will issue a full report on the bike's capabilities and consider whether it should add these bikes to its current fleet of 400 gas-powered motorcycles.