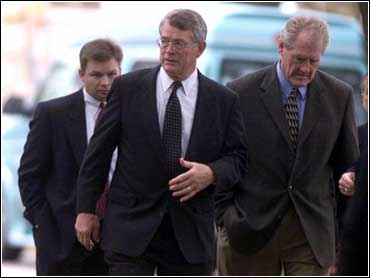 A gray fedora rested on the altar. An open Bible sat inches away. A portrait of a serious-looking Tom Landry stared at pews filled with Pro Football Hall of Famers and Super Bowl champions.

Those simple images of class, faith and success reflected the words spoken Thursday during a memorial service in honor of the former Dallas Cowboys coach.

"Tom Landry was everything the world believed him to be," said his son, Tom Landry Jr. "He was a man of virtue, of high moral character, a man whose talents and hard work propelled him to the top of his profession.

"Tom Landry never strayed from his ideals. He remains a consistent, shining example to all of us."

Landry's 29 years with the Cowboys were only a backdrop for many of the stories told during an hourlong church service for relatives and friends. The focus instead was his faith and staunch principles.

"He was our rock, our hope, our inspiration. He was our coach," Roger Staubach said. "Probably there were some players that didn't love him, but they all respected him. He was committed to us, and you don't find that type of commitment in life very often."

The mood was much lighter during a second service, a two-hour public ceremony at a downtown symphony center. A dozen former players and colleagues shared their Landry memories, often through humorous anecdotes.

Tommy Loy opened it with a trumpet solo of the national anthem, as he did so many of Landry's home games. The service closed with dozens of former players walking across the stage and placing yellow roses into a vase as a choir sang "Amazing Grace."

No Cowboys symbols were displayed at either ceremony. The closest was a photo of Landry inside Texas Stadium at one end of the public service's stage. At the other end was a blown-up photo of Landry wearing his trademark hat and his arms crossed. It's similar to the picture on the cover of his 1990 autobiography.

Speakers were asked to keep to a three-minute limit. Hardly any did.

Bob Lilly, Landry's first draft pick, remembered how he was awed the first time he met the coach. Randy White said one of his fondest memories was Landry consoling him after his father's death.

Drew Pearson suggested Landry was putting together the GFL, God's Football League, and had a lineup that included Derrick Thomas and Walter Payton.

"This is the vision I have: Vince Lombardi sitting in one hand of God's and Tom Landry in the other," Huff said.

Abou 1,000 people attended the service at Highland Park United Methodist Church, including the five Cowboys players in the Pro Football Hall of Fame: Staubach, Lilly, White, Tony Dorsett and Mel Renfro. Other former Cowboys and New York Giants players and coaches also were there, as was NFL commissioner Paul Tagliabue.

Several buses carried them and other to the second service, which drew about 1,200 fans. Thousands more watched on live television.

Landry died Saturday at age 75. He had been battling leukemia since May.

All state buildings were asked to lower the Texas flag to half-staff in Landry's honor Thursday as the two memorial services were held in Dallas and another in Mission, the South Texas town where Landry was born and raised.

Landry coached the Cowboys from their birth in 1960 until February 1989. He guided the club to 20 straight winning seasons, 13 division titles, five Super Bowl appearances and two championships.

Although the glitzy Cowboys became "America's Team," Landry remained the quiet guy in the fedora hat and business suit. His blank expressions belied a competitive personality and caring heart.

"Tom, you were certainly an enigma to all of us," said former running back Don Perkins, a member of the team's Ring of Honor. "We loved you and you scared the hell out of us simultaneously."

Staubach stopped to choke back emotions several times during his eulogy at the church, but he also drew laughs when talking about the coach's meticulous and ever-changing game plans.

At the Super Bowl in January 1972, Staubach was in Landry's hotel room every night leading up to the game. Their cram sessions paid off as Dallas beat Miami to make Landry and the Cowboys champions for the first time.

"It was preparation that won us that championship," Staubach said.

At both services, Staubach read a religious poem he said was Landry's favorite. It was written by Lisa Landry Childress, the coach's daughter who died in 1995 after a four-year battle with liver cancer.

"Coach," Staubach said, sniffing back tears. "Give Lisa our best. We'll miss you both."

On Wednesday, about 400 people attended a private funeral and burial. Before the casket was closed, Landry Jr. placed a fedora inside. The ceremonies also included a 21-gun salute and a flyover by F-16s and World War II-era military planes, the type Landry flew in combat over Europe.