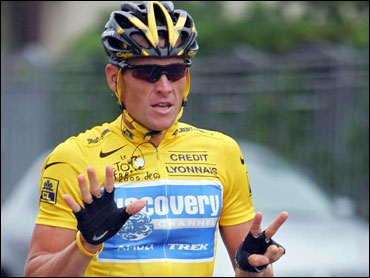 Arbitrators for the World Intellectual Property Organization ordered the transfer of the domain names www.livestrongbracelets.net and www.talk-livestrong.com to the American cyclist, who had complained that it infringed his trademark rights and that they had been registered in bad faith.

The ruling upheld Armstrong's complaint against the individual that registered the names — Chris Angeles, of West Covina, California.

The $1 LiveStrong bracelets are sold by the Texas-based Lance Armstrong Foundation to raise funds for cancer research.

On Tuesday, www.livestrongbracelets.net was still offering bracelets that are "just like the Livestrong bracelets," while www.talk-livestrong.com was offering services to help create your own bracelet.

The site names "incorporate the mark in its entirety, adding descriptive or non-distinctive words that a prospective customer might reasonably expect to see associated with a Web site operated by the complainant," the ruling said.

Arbitrator Scott Blackmer noted that Angeles had responded only to claim that he already had "unlocked" www.livestrongbracelets.net and that the other Web site "cannot be canceled because of returned orders," although there was no more traffic.

Angeles was given several opportunities to assert a right or a legitimate interest in the domain names, but failed to do so, the ruling said.

A number of celebrities have won the Internet version of their names back through U.N. arbitration, including Morgan Freeman, Julia Roberts, Madonna, Nicole Kidman, Pamela Anderson, Pierce Brosnan and Carmen Electra.

Anyone can register a domain name for a few dollars which has led to so-called "cybersquatters."

The U.N. arbitration system, which started in 1999, allows those who think they have the right to a domain name to get it back without having to fight a costly legal battle or pay large sums of money.